WASHINGTON, D.C. -- Despite the abundance of digital diversions vying for their time and attention, most Americans are still reading books. In fact, they are consuming books at nearly the same rate that they were when Gallup last asked this question in 2002 -- before smartphones, Facebook or Twitter became ubiquitous. More than one in three (35%) appear to be heavy readers, reading 11 or more books in the past year, while close to half (48%) read between one and 10 and just 16% read none. The number of Americans who say they read no books in the past year has doubled since the first time Gallup asked this in 1978, from 8% then to 16% now, but has been fairly steady near the current level since 1990.

Oldest Americans Reading More Than They Used To

Although the survey did not track the types of books that Americans read by age group, book reading in general is fairly similar by age group among U.S. adults. It is a bit more prevalent among the oldest and youngest age groups than among those in the middle years. Roughly nine in 10 adults aged 18 to 29 (91%) report reading at least one book in the past year -- possibly related to the required reading among college students within this age group. The percentage among those aged 65 and older is 85%. Nearly four in 10 respondents in both age groups say they read more than 10 books.

The most meaningful differences in reading behavior since 2002 are evident among Americans aged 65 and older. Collectively, they are reading more books than the same age group did in 2002. The percentage reading one or more books increased from 68% to 85%, including a four-percentage-point increase in those reading 11 or more, from 33% to 37%.

With the advent of e-readers and tablets in the past decade, some futurists predicted the imminent extinction of printed books. It was said that the ability to download, read and store thousands of digital books on these devices would quickly reduce demand for the paper versions. However, this prophecy appears to be far from true -- so far. Among those who say they read at least one book last year, the vast majority say they most often read printed books, at 73%. About one in five most often read electronic books, while only 6% mostly experienced books in audio form.

Despite Americans' ability to access more information, social networks, games and media than ever before, as well as the lingering rumors of the book's demise, Americans still say they are reading books.

Additionally, while some have alleged that technology would displace printed books, this shift has not been as swift as expected. In fact, recent industry data show that sales of printed books have been increasing. While it is unclear if Americans are reading books only partially, reading shorter books or reading lower-quality books than they used to, the fact that they are reading just as many books as they were 15 years ago could signify welcome news to aspiring authors and publishers.

This suggests that book reading is a classic tradition that has remained a constant in a faster-paced world, especially in comparison to the slump of other printed media such as newspapers and magazines. 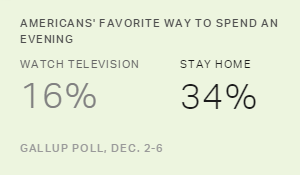 Once their top choice, a record-low 16% of Americans now name television as their favorite evening pastime. Thirty-four percent currently name "staying home" as their first choice.

About Half of Americans Reading a Book

About one in every two Americans is currently engrossed in some type of book, according to Gallup's latest measure of the public's reading habits. About half of Americans also say they have read more than five books in the past year, not much different from the number reported a decade and a half ago. There is no widespread pattern as to how people select their books -- some choose by the author, others based on recommendations from their friends, and still others by browsing.