WASHINGTON, D.C. -- Television viewing was once so beloved by Americans that nearly half said it was their favorite thing to do at night, but it is now less popular than ever as an evening pastime. Fifty years ago, 48% of the public said it was their "favorite way of spending an evening"; this percentage has decreased steadily through the decades and now stands at a record-low 16%. Meanwhile, the top choice for U.S. adults when asked how they like to spend an evening is "staying home" with 34% mentioning this activity in Gallup's December Lifestyle poll. Resting/Relaxing (13%) and reading (12%) are the third and fourth favorites, respectively. Both have been among the top choices all 11 times Gallup has asked the question since 1966.

The previous low for television viewing -- which also includes mentions of watching DVDs or videocassettes -- was 23% in 2005, the last time Gallup asked U.S. adults how they like to spend an evening. That was a slight drop from 26% in 2001. In the current poll, those most likely to say staying home with the family is their favorite thing to do at night include those younger than 55, parents and workers. The only major demographic group as likely to say television is their favorite as staying home is the 55-and-older group: 25% say television, 23% list staying at home. Less than half that many choose television among those aged 35 to 54 (12%) and 18 to 34 (10%). The percentage of U.S. adults who favor spending their nights reading, relaxing or visiting with friends has, for the most part, changed little over the past half-century, while the rise in the popularity of staying home and the fall of television watching have been generally steady during that time, with a few blips. However, going out for the night -- whether to dine, see a movie, go dancing or go to bars -- grew substantially in popularity between 1966 and 1986, only to take a steep dive in the new century.

Gallup's question on Americans' favorite way to spend an evening serves as a barometer of changing lifestyles. It has captured the steady descent of television as the nation's favorite evening activity. Perhaps most tellingly, it has illustrated the changing mindset of Americans who have embraced staying at home over time.

Many factors could be behind the shift away from TV as a top choice. Television is now only one of many screens available to U.S. adults, and with Americans looking at smartphones and tablets on a near-constant basis throughout the day, the idea of sitting down to watch TV at night as a special thing to do may have lost its glow over the years. 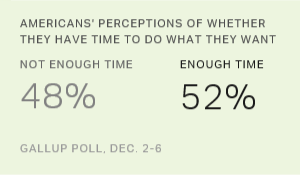 Americans' Perceived Time Crunch No Worse Than in Past

The 48% of Americans who say they don't have enough time to do what they want to do is no higher than it has been on average over the past 14 years. It is marginally lower than it was in the 1990s.

Most Americans Prefer to Spend Their Summer Evenings Outdoors

The majority of Americans prefer specific outdoor activities when asked about their favorite way to spend an evening during the summer. The most frequently mentioned activities are sitting outside on the porch, deck, or patio, barbecuing, and being at home with family. Just 5% prefer to watch television, which has typically been one of Americans' most frequent responses when Gallup has asked this question without reference to a particular season of the year.

Thirty-two percent of Americans say their ideal evening is spent at home with family, making that activity the most popular, followed by watching television. These two activities have traditionally ranked as Americans' favorite ways to spend the evening. Family and friends rank first with younger adults, while watching television ranks first among older adults.