PRINCETON, N.J. -- Despite the fast-paced, multitasking, constantly-in-touch life many Americans live today, the 48% who say they do not have enough time to do what they want to do is not much different from the 47% average over the past 14 years. Further, the percentage is slightly lower than it was in the 1990s. This latest update is based on Gallup's Dec. 2-6 Lifestyle poll, which can be compared to the eight times Gallup previously asked this question each December between 2001 and 2008. During that period, the average percentage saying they did not have enough time was 47%, essentially the same as in 2015. Since 2001, the highest "not enough time" percentage is 49%, and the lowest is 41%.

When Gallup asked the question in September 1990 and in March 1995, slightly more than half of Americans said they did not have enough time. Workers, Those With Children and Younger Women Most Time-Pressured

Women's role in caring for children could factor into the wide gender disparity in time pressure among younger Americans. Sixty-one percent of women younger than age 50 report not having enough time, compared with 48% of younger men who say the same. There is almost no gender difference in perceived time pressure between men and women aged 50 and older. A low 21% of those aged 65 and older say they do not have enough time to do what they want, reflecting the fact that having young children and working are widely associated with younger Americans. There is little difference in not having enough time among those younger than age 65.

A recent Economist article posits that "time poverty" may be as much a result of perception as the reality of not having enough time. Gallup data, however, do not support the hypothesis that Americans' perceived time pressure has been increasing -- at least not based on the trends over the past 25 years. The percentage of Americans who say they do not have enough time has stayed basically the same since 2001 and is slightly lower now than two measures recorded in the 1990s.

This finding fits with other data showing that Americans actually have more leisure time today than they did in the past, based on their spending fewer hours working and in normal household activities. There are big differences in time use across segments of the population, however, supporting Gallup's findings that certain categories of Americans -- those who are working or responsible for young children in particular -- perceive themselves as much more time-pressured than others.

Finally, because there are no comparable data showing how Americans in past generations would have responded to this question, there is no precise way of knowing whether the nearly half of Americans who today say they don't have enough time is higher or lower than at previous points in America's almost 240-year history. 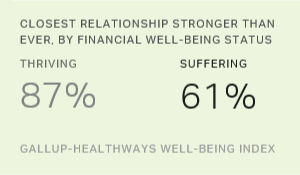 Most U.S. smartphone owners check their device at least hourly, including 52% who check it frequently within the hour. Young adults are especially hooked, with 73% checking it multiple times an hour.