WASHINGTON, D.C. -- The 115th U.S. Congress begins its term with a 19% job approval rating, similar to the level measured for the institution in recent years and in line with the 18% to 20% ratings it received in the final months of 2016. The latest rating, based on a Jan. 4-8 Gallup poll, comes as the new Congress was sworn in on Jan. 3 and congressional Republicans attempted to make a rule change that would have weakened the watchdog Office of Congressional Ethics. They later scrapped the plan, and the incident did not affect Americans' views of Congress.

The current 19% congressional approval is at the low end of the historical spectrum, which has ranged from a low of 9% in November 2013 after a federal government shutdown to 84% approval in October 2001 after 9/11. Congress' overall approval rating has been below 25% since 2010.

Although Republicans control both chambers of Congress and are about to control the White House, the party faithful are no more likely than Democrats to approve of the institution, at 20% and 19%, respectively. Independents have a similar view of Congress, with 17% approving of how it is handling its job. This pattern of similarly low party ratings of Congress has generally held for about the last year.

Holding both chambers of Congress typically boosts approval ratings among members of the majority party. Democrats' excitement about President Barack Obama's inauguration and control of Congress drove overall congressional approval up to 31% in February 2009. Similarly, approval increased after George W. Bush's inauguration in 2001, when Republicans held both chambers for part of that year.

With a unified government for the GOP on the horizon again, Donald Trump's inauguration could buoy Republicans' ratings of Congress. President-elect Trump and a Republican-controlled Congress have an ambitious legislative agenda, leading with a plan to undo Obama's signature domestic achievement, the Affordable Care Act, also known as Obamacare. While a majority of Americans agree the law needs to be changed or repealed, they do not agree with the way Congress is doing its job more generally. This suggests there is no reservoir of goodwill for Congress to fall back on as it attempts to enact its agenda in the coming months. 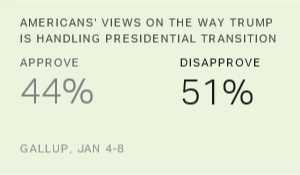 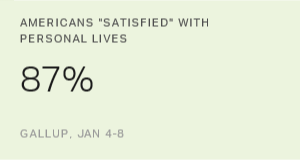 In U.S., Personal Satisfaction Back to Pre-Recession Levels

At the start of 2017, 87% of Americans are satisfied with their personal lives. Satisfaction with the country's direction remains much lower, at 26%. 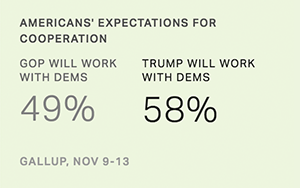