WASHINGTON, D.C. -- Americans view both President Donald Trump (44%) and his daughter and adviser, Ivanka Trump (47%), about as favorably. However, the president is more widely known than his daughter among Americans, and also has much higher unfavorable ratings than she does, 55% vs. 36%. President Trump has an overall net negative rating of -11, while Ivanka has a +11 net rating.

These data come from Gallup's survey conducted from May 3-7.

Virtually all Americans are familiar with Donald Trump, with only 1% having no opinion of the president. Ivanka Trump is less familiar, though still well-known to Americans, with 16% saying they have never heard of or have no opinion of her.

The percentage of Americans who know enough about Ivanka Trump to have an opinion has increased from 79% to 84% since Gallup first asked about her in August of last year.

Ivanka Trump's favorability rate among Americans in August (49%) was nearly the same as now (47%). However, Americans who say they have an unfavorable view of her increased slightly from 30% to 36% in that same period.

Ivanka Trump is unsurprisingly most popular with Republicans, with 81% saying they view her favorably and 9% unfavorably. This is roughly similar to Republicans' views of her father (86% favorable, 13% unfavorable). But while Democrats view both Trumps negatively, they view Ivanka Trump substantially less unfavorably than her father. More than six in 10 Democrats (63%) view her unfavorably, as opposed to nine in 10 (90%) who express similar sentiment about Donald Trump. Independents are also significantly less negative about Ivanka Trump than about her father.

Men are substantially more positive than women about both Trumps, as would be expected given that men are more likely to be Republicans. Among both men and women, however, Ivanka Trump is more positively evaluated than her father.

In March, Ivanka Trump assumed an unprecedented role as an official adviser to her father. That, along with her history as an author, reality television star and businesswoman, has made her a fairly well-known figure, with 84% of Americans having an opinion of her. Given Donald Trump's past reliance on family members to fill sensitive positions and the potential for a shakeup of senior White House staff, Ivanka Trump may be pressed into a more prominent role in her father's administration.

Americans currently hold a less unfavorable image of Ivanka Trump than they do of Donald Trump. However, if her involvement in her father's administration increases, it is possible that these attitudes could shift. 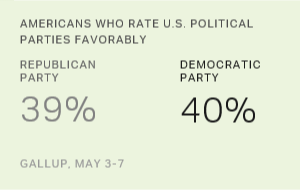 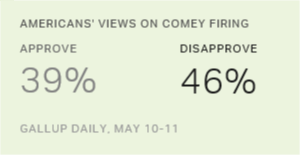