WASHINGTON, D.C. -- Twenty-five percent of U.S. adults believe Donald Trump acted illegally in his campaign's alleged involvement with Russian officials during the 2016 presidential election, while 37% say he acted unethically but not illegally and 35% say he did nothing wrong. From a historical perspective, Americans' belief that Trump is culpable is on the high end of reactions to several past presidential controversies. However, it is on par with two matters involving former President Bill Clinton.

The Trump data are based on an Aug. 2-6 Gallup poll, which employed the same "illegal/unethical/nothing seriously wrong" format used to ask about prior presidential controversies dating back to the 1990s.

Some of these matters were protracted political storms, while others were only in the news for a brief time. For the most part, Americans have tended to say the president did not act illegally, although in almost every case a majority perceived the president's actions to be either illegal or unethical.

At most, between 24% and 29% of Americans believed presidents broke the law. In addition to the 25% who currently say Trump acted illegally in the Russia matter, 29% said in 1998 that Bill Clinton acted illegally in the Whitewater real estate deal that took place during his years of public service in Arkansas. Also in 1998, 24% said Clinton broke the law concerning matters covered in the Kenneth Starr investigation, which included the Whitewater deal but later was expanded to Clinton's having an affair with a White House intern and lying about it under oath.

Although similar percentages of Americans thought Clinton did something illegal in the Whitewater and Lewinsky matters as think Trump did with regard to Russia, more thought Clinton acted unethically. One in three Americans say Trump did nothing wrong, which also ranks among the higher readings in Gallup's trend.

Fewer than one in five Americans thought Clinton acted illegally in three other matters that prompted calls of wrongdoing. This includes his end-of-administration pardons in 2001, 1996 fundraising activities, and allowing China to acquire sensitive missile technology, allegedly in exchange for campaign contributions.

President George W. Bush also had his share of controversies, but only one -- involving national security leaks -- resulted in more than 20% of Americans believing the president's actions were criminal. Specifically, 21% in 2006 thought Bush had acted illegally when intelligence information was leaked to reporters. Former staffer Lewis "Scooter" Libby was jailed for lying about revealing the information.

Notably, 31% of Americans believed in 1998 that Hillary Clinton -- Trump's rival in the 2016 presidential election -- acted illegally in the Whitewater matter.

Questions about possible collusion between the Trump campaign and the Russian government have dogged his administration, and special counsel Robert Mueller is investigating the matter. Seventy-three percent of Americans are following the news about possible Trump campaign-Russia ties very (33%) or somewhat (40%) closely. That is above the average of 60% attention paid to more than 200 different news stories Gallup has asked about since 1991. It is similar to the 74% who say they are following news about Trump's ongoing disputes with the news media closely.

To date, several Trump campaign officials -- including current Attorney General Jeff Sessions, former campaign manager Paul Manafort, and family members Donald Trump Jr. and Jared Kushner -- have revealed they met with Russian officials or lobbyists during the campaign. It is unclear to what extent the president was involved in such meetings or was aware of their taking place.

In the most recent poll, Gallup asked half of respondents about Trump himself and the other half about "Trump campaign officials." Americans responded similarly even though there is evidence that Trump's associates met with Russian officials, or with operatives who purportedly had ties to the Russian government.

Most Republicans Say Trump Did Nothing Wrong

Opinions about Trump campaign officials' actions are largely similar, though slightly fewer Republicans absolve them (60%) than the president. Here again, Democrats are divided in their views of whether Trump officials did something illegal (46%) or unethical (43%).

Democrats (38%) are somewhat more likely than Republicans (30%) to be paying very close attention to the story. This partially explains the difference in the higher percentage thinking Trump or his associates did something illegal among those following the story very closely.

Most Americans, consistent with their usual reactions to presidential controversies, do not believe Trump broke the law in his campaign's alleged involvement with Russian officials. But the one in four U.S. adults who do believe Trump acted illegally is among the highest Gallup has measured for similar past situations.

At the same time, the one-third who believe he did nothing wrong is also one of the highest to hold that view, underscoring today's highly polarized political environment. Still, a majority believe Trump did something either illegal or unethical -- suggesting that as long as Mueller's investigation into the Russia matter continues, Trump will govern with a cloud of suspicion hovering over his administration. 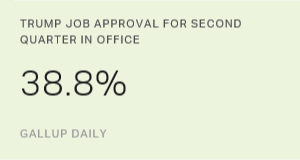