WASHINGTON, D.C. -- Americans' approval of Congress ebbed further in October, to 13%, and it is now at its lowest point since July of 2016. This is a few percentage points higher than the historic low of 9% recorded in 2013.

These data are from an Oct. 5-11 Gallup poll, as Congress focused on the fate of U.S. healthcare and President Donald Trump's call for passing tax reform legislation. More recently, after several unsuccessful attempts to repeal the Affordable Care Act, some Senate Republicans are trying to reach a bipartisan deal with Democrats to halt growing insurance premiums. But this effort may not materialize legislatively, as Trump has been unclear on whether he will support the bill.

Longer term, Republicans' rating of Congress has dropped considerably since spiking to 50% in February as Republican control of both the presidency and the legislative branch gave a jolt of optimism to the party's base. But their approval has fallen as the year progressed, possibly because many of the promises Republican candidates made to voters have not come to fruition.

Independents' approval of Congress, too, has waned since February, though more gradually. The high mark of their approval was 25% that month, but their ratings of the institution have ebbed slowly over the course of 2017, with October marking a new low for the year thus far at 10%.

Meanwhile, Democrats have had consistently low ratings of Congress since February, with their current rating of 14% just slightly above the low point of 2017. Americans' approval of Congress has historically lagged that of other major institutions, but Americans' views of the legislative branch have been particularly low since the late 2000s. The last time Congress received approval from even a third of Americans was in mid-2009. It's hard to see this changing anytime soon, as the largest recent increases in approval came after one party assumed control of the presidency and both houses of Congress -- Democrats in 2009 and Republicans earlier this year. In both instances, the increase in congressional approval did not last long, with ratings reverting back to what they were by the end of the first year of one-party control -- a phenomenon that could be occurring yet again this year.

The impact of specific congressional actions may also not do much to improve the way Americans view Congress. Partisan differences on individual issues have grown over time, making any legislative action unlikely to please even a slim majority of Americans. 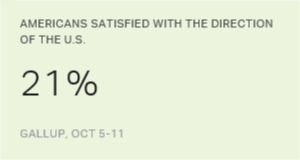