WASHINGTON, D.C. -- Liberians vote Tuesday in the second round of a presidential election that so far has been mostly as uneventful as they expected. Prior to the first round of voting in October, 86% of Liberians believed the elections would be held peacefully; few expected the violence (6%) that has marred other recent African elections. They also had relatively high hopes for the legitimacy of the process, with their confidence in the honesty of their elections rising above a majority (55%) for the first time since 2007. The election has not been entirely free of controversy. The presidential runoff scheduled for next week between former soccer star George Weah and Vice President Joseph Boakai was delayed for more than a month as Liberia's Supreme Court investigated accusations of fraud. The court ruled Dec. 7 that the allegations did not warrant a new vote.

The last time that a majority of Liberians expressed confidence in their election process was in 2007, just two years after outgoing President Ellen Johnson Sirleaf's historic election as Africa's first female president. Two-thirds of Liberians at the time were confident in the honesty of their elections. Confidence waned after that, along with Liberians' job approval of their country's leadership in general, which fell from 76% in 2007, to 62% in 2008, and eventually reached a low of 31% in 2014, during an outbreak of Ebola in the country.

Liberians' recent increase in confidence regarding the honesty of their elections is likely related to their overall optimism in the democratic process in the country, with a full 90% having said they planned to vote in the country's then-pending election during Gallup's most recent survey conducted May 31-July 1.

Liberia has experienced two civil wars in the past 30 years that devastated the country and led the United Nations to deploy a peacekeeping force there from 2003 to 2016. This presidential election is the first in the country since the U.N. handed back responsibility for security to local authorities.

The drawdown of the U.N. force and the lack of a tradition of peaceful, democratic transition in the country could have explained uncertainty over the country's elections. However, 86% of Liberians said the elections would be peaceful, and 68% said it would be "somewhat" or "very" unlikely that the vote would plunge the country back into violence. Liberians' optimism proved true for the first round of elections, with only isolated incidents of violence reported.

This election represents a pivotal moment in Liberia's recent history -- the transition from one democratically elected leader to another -- which has not occurred in the country since 1944. While there has been considerable violence in Liberia's recent past, Liberians expect this transition to take place honestly and peacefully, unlike recent elections in Kenya. Thus far, this confidence has been proven well-placed, though it is likely tensions will remain high as the final round of the election approaches.

These results are based on face-to-face interviews with approximately 1,000 adults, aged 15 and older, conducted in Liberia May 31-July 1, 2017. For results based on the total sample of national adults, the margin of sampling error is ±3.6 percentage points at the 95% confidence level. All reported margins of sampling error include computed design effects for weighting. 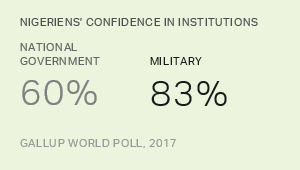 Less than half of residents in seven African countries that will be holding elections in coming months say they have confidence in the honesty of their elections. Confidence is lowest in Chad, at 18%.