It is difficult to determine a specific cause for last week's uptick, although it may reflect news of Trump's Friday, Dec. 22 signing of the new tax bill into law.

Trump's weekly approval average was last at 39% July 10-16. Trump's weekly average was routinely at the 40% or higher level through the winter and early spring of 2017, but was last at 40% or higher in May, and last reached as high as 39% in mid-July. His lowest weekly average has been 35%, recorded at several points last month and earlier in the fall and late summer.

Republicans' approval of Trump was 82% last week. Independents registered 34% approval, along with 9% among Democrats. 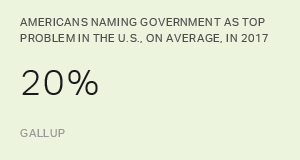