WASHINGTON, D.C. -- U.S. teachers are much more likely to see restrictions on gun ownership as the best way to prevent school shootings over any other approach. Asked in an open-ended format what could be done to prevent U.S. school shootings, 33% mention stricter gun laws, 22% say a ban on assault weapons or other types of guns, and 10% say stricter background checks on gun purchases. About one in five teachers mention better funding for mental health services and another 6% say to make more mental health resources available in schools. Fifteen percent see improved school security as the best way to prevent shootings.

The recent school shooting in Parkland, Florida, one of the deadliest in U.S. history, has reignited the debate about how best to protect students, teachers and staff from future tragedies. On Tuesday, another school shooting took place at a Maryland high school. Relatively few teachers express a great deal of confidence in their school's ability to handle such an event.

In addition to suggestions related to gun laws, mental health policies and school security, other solutions teachers offered focused on addressing larger societal problems such as poor parenting, a lack of discipline and morality, exposure to violent media, and media coverage of school shooters. Four percent of teachers say there is nothing that can be done to prevent school shootings.

Teachers' preference for steps aimed at gun control could reflect their partisanship more than their profession. Roughly twice as many teachers identify as Democrats or say they are Democratic-leaning independents than identify as Republicans or lean Republican. Democrats are much more likely to favor gun restrictions than Republicans are.

These results are based on web interviews with U.S. teachers of grades kindergarten through 12 who are members of Gallup's national panel. The Gallup Panel recruits members using random sampling methods. The sample of 497 teachers is weighted to be representative of U.S. teachers nationwide. Interviews were completed between March 5 and 12.

Teachers Rate Gun Restrictions as Most Effective at Preventing Shootings

Consistent with their responses to the open-ended question, teachers rate restrictions on gun ownership as being more effective at preventing school shootings than other proposals. Of nine proposals tested in the survey, the two ideas that teachers deem most effective are requiring background checks for all gun purchases and banning the sale of the AR-15 and other semi-automatic assault weapons. Fifty-seven percent of teachers say each would be "very effective" in preventing school shootings.

A third proposal -- banning bump stocks or other mechanisms to convert ordinary guns into automatic weapons -- also surpasses the majority level, with 52% saying such a step would be very effective. Teachers are somewhat less likely to think a fourth gun restriction -- raising the legal age to purchase guns -- would be a very effective way to reduce school shootings, with 45% holding that view.

Substantial minorities of teachers think programs initiated in the larger community would be effective. These include instituting new programs to identify, assess and manage students who may pose a threat (48%) and increasing training for police officers and first responders about how to respond to active shootings (41%).

Teachers are least inclined to think that modifying security procedures at schools is a viable means of preventing school shootings. Between 21% and 33% think installing more security checkpoints at schools, increasing the number of school security personnel at schools and instituting federal programs to help schools develop emergency response plans would be very effective methods.

A separate question in the survey found 13% of teachers say that allowing certain teachers to carry guns would be "very effective in limiting the number of victims if a school shooting were to occur."

The two groups hold similar attitudes on developing programs to identify and manage students who may pose threats and raising the age limit for gun purchases.

The Parkland school shooting has given rise to student activism to prevent school shootings, with students across the country calling for changes to U.S. gun laws. Teachers seem to agree with that approach, as they are more likely to believe tighter restrictions on gun ownership would be the most effective way to prevent future school shootings compared with other possible solutions. These beliefs may well be influenced by teachers' Democratic political leanings.

After the Parkland tragedy, the state of Florida passed gun control measures as part of its school safety legislation, including a ban on bump stocks and an increase in the legal age to purchase rifles and shotguns. The National Rifle Association has challenged those provisions in court. 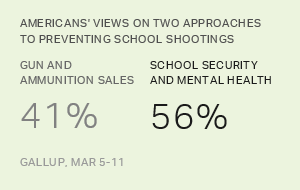 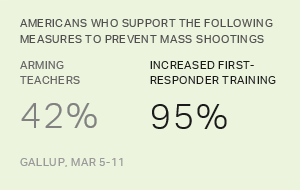