WASHINGTON, D.C. -- A slim majority of Americans now believe that middle-income people pay "their fair share" of federal taxes, up significantly from last year's reading. A large majority of Americans think corporations pay too little in taxes, although the view that corporations pay their fair share has edged upward. Americans' views about the taxes of upper- and lower-income people haven't changed much from last year, with more than six in 10 saying upper-income Americans pay too little, while about half say lower-income people pay too much.

Despite these changes, this year's pattern of attitudes about the tax burden of the four taxpayer groups is consistent with the historical pattern. Americans broadly agree that corporations and upper-income people pay too little, while they have more mixed feelings about the lower- and middle-income tax burden.

This year's update comes in the aftermath of the new Tax Cuts and Jobs Act signed into law on Dec. 22, 2017. Gallup's April 2-11 Economy and Personal Finance survey shows that the majority of Americans continue to have net negative views of the law (39% approve, 52% disapprove) and say they are unsure of how it is affecting them personally (55%).

In spite of this uncertainty about the personal impact of the tax bill, the proportion of Americans saying middle-income people pay their fair share rose this year from 40% to 51%. The percentage saying middle-income people pay too much dropped concomitantly from 51% to 42%. This year's poll also found a decrease in the percentage of Americans describing their personal taxes as "too high."

While this is the most positive Americans have been about the fairness of taxes for the middle-income since 2013, fewer believe this group pays its "fair share" than did so six years ago, in 2012. On the other hand, all three measures have, to some degree, shown Americans feeling more positive about what tax the middle class pays than they did in the 1990s, most likely reflecting the lasting impact of the Bush tax cuts in 2001-2003. This year's uptick in the percentage of Americans saying middle-income people pay their fair share is mainly driven by the more positive views of Republicans and independents. Democrats' views are statistically similar this year to last year.

One signature aspect of the 2017 tax-cut law was to lower the tax rate for corporations. This is seemingly out of sync with Americans' prevailing attitudes from 2004-2017, when solid majorities consistently said corporations pay too little in taxes, not too much.

Now, while the majority of Americans continue to say corporations pay too little, the percentage saying "fair share" has edged up by five percentage points. More Than Six in 10 Say Upper-Income Pay Too Little

Most interpretations of the tax reform bill indicate that upper-income Americans will pay lower taxes as a result of the new law. As was the case for corporations, this is contrary to the underlying sentiment of the majority of Americans, who have for years said upper-income people pay too little in taxes -- although that percentage dropped during and after the 2007-2009 recession.

There has been no significant change in views of the taxes paid by upper-income people this year. Americans became somewhat more likely to say that upper-income people paid their fair share in the early 2000s, after the Bush tax cuts, but that percentage has stayed fairly constant in the years since. About half of Americans believe lower-income people pay too much in federal taxes, about a third say they pay their fair share and 16% say they pay too little. These views are little changed from last year, although the tendency for Americans to say lower-income people pay too much has generally risen since the years immediately after the recession. Working with President Donald Trump, Washington lawmakers have made the most significant changes to the federal tax code in decades. Anyone getting a paycheck should by now have seen the impact on the amount withheld for their federal income taxes, yet over half of Americans are uncertain if the new law will help or hurt them in the long run. Still, more Americans today than a year ago believe middle-class taxes are fair, reinforcing a previous 2018 Gallup finding that fewer Americans believe their own taxes are too high.

The public has for decades said that corporations pay too little in taxes, and that continues in the 2018 update. But this year, belief that corporations pay their fair share in taxes is up modestly, even as corporations enjoyed a major decrease in their taxes as a result of the new law. This change in views was driven by Republicans (and, to a lesser degree, independents) and may reflect a general sense among Republicans in particular that the new law is fairer for all concerned and will accomplish its goal of stimulating the economy.

Overall, the new data on taxes provide evidence of some improvement in Americans' feelings about the tax burden of middle-income people and corporations, most likely attributable to the new tax law. 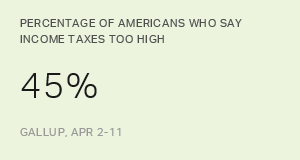 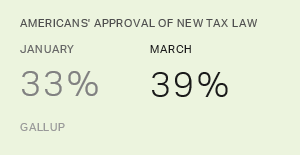