WASHINGTON, D.C. -- Americans do not regard top Trump administration officials as very ethical, with 37% describing their ethical standards as excellent or good and 59% as not good or poor. The Trump administration's ethical rating is lower than readings for other presidential administrations, most of which had positive ratings of 50% or better.

The latest results are based on a May 1-10 Gallup poll. The ethics question has been asked at least once about each president since Ronald Reagan, though there are limited measurements on each.

Three separate measures for Ronald Reagan were above 60%, though all were taken in 1983 and 1984, before the Iran-Contra scandal. Bill Clinton had the prior low of 43%, recorded in January 1994 after he requested that a special prosecutor be named to investigate the Whitewater real estate controversy.

Trump's low ratings likely reflect the multiple controversies surrounding his presidency, including allegations of Russian involvement in his presidential campaign and payments a Trump associate made to adult film actress Stormy Daniels.

In addition to Trump himself, other members of his administration have faced questions about their activities. For example, EPA administrator Scott Pruitt has been questioned by Congress about lavish spending and several other potential ethical violations. Former Health and Human Services Secretary Tom Price resigned last year over his use of government funds to travel by private jet.

In most cases, administration ethics ratings have been higher than the president's job approval rating at the time, so Trump's lower rating differs from the usual pattern.

Perceptions of the ethical standards of Trump administration officials vary greatly by party, as would be expected. Whereas 71% Republicans rate the administration's standards as either excellent or good, the same percentage of Democrats say they are poor. Just 9% of Democrats rate them positively.

Trump fares worse among both his own party and the opposition party than either of his two immediate predecessors did.

President Trump's first- and second-year presidential job approval ratings have been the lowest Gallup has measured. Americans rate the ethical standards of his leading officials low as well. In fact, more approve of the job Trump is doing as president than rate his officials' ethics positively, and those ethics ratings are the lowest measured to date.

While the low ratings for the Trump administration's ethics are likely driven to a large degree by opinions of the president personally, his top-ranking officials have had their share of controversies that could be dragging these ratings down. Trump has chosen to publicly back some of his advisers (Pruitt) and would-be advisers (former Secretary of Veterans Affairs nominee Ronny Jackson) who have become embroiled in controversy. But he has also asked others, such as Price and former national security adviser Michael Flynn, to resign. Perceptions of Trump administration ethics are unlikely to improve without a big boost in his job approval rating, but continued issues with his cabinet officials and advisers could blunt the impact any improved job approval ratings might have on these ethics ratings. 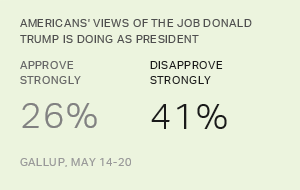 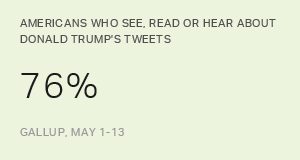 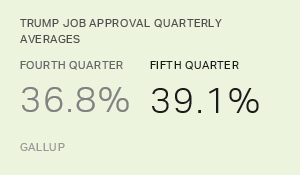 President Donald Trump averaged 39.1% job approval during his fifth quarter in office, up slightly from the prior two quarters, but still well below those of his predecessors.