WASHINGTON, D.C. -- An average of 41.9% of U.S. adults approved of the job President Donald Trump was doing as president throughout his sixth quarter in office, spanning April 20 through July 19. The average was up from 39.1% in his fifth quarter, and it slightly exceeds his first quarter 41.3% average as his personal best. Trump's job approval was 40% or higher each week during his sixth quarter. The sixth quarter included a personal high of 45% during the week of his historic June 12 summit with North Korean leader Kim Jong Un, matching his first weekly job approval rating after taking office in January 2017.

The momentum from the summit was not sustained, however, as public approval of Trump slid back to 41% the week after it took place.

Last week, Trump had a high-profile meeting with another foreign leader, Russian President Vladimir Putin. The visit may be best remembered for Trump's publicly doubting U.S. intelligence accounts of Russian meddling in the 2016 U.S. presidential election. Members of both parties criticized Trump for doing so, although his approval rating appeared unaffected, registering 42% the week of July 16-22.

Republicans' approval of Trump averaged a healthy 88% during his sixth quarter, compared with 36% among independents and 9% among Democrats. All party groups' approval was slightly higher in the sixth quarter than in the fifth quarter, including a three-percentage-point increase among independents, two points among Republicans and one point among Democrats.

Compared with the nine other post-World War II presidents elected to their first term in office, Trump had lower support than all but one. In April through June 1978, an average of 41.8% of Americans approved of the job Jimmy Carter was doing as president.

Several other recent presidents were also, like Trump, below majority level approval at this point in their presidencies, including Ronald Reagan (44.2%), Bill Clinton (46.1%) and Barack Obama (47.3%). Those three presidents, similar to Carter but unlike Trump, were serving during challenging economic times.

George W. Bush had the highest sixth-quarter average -- 74.9% -- because of the continued rally in support for public leaders after the Sept. 11, 2001, terrorist attacks.

Trump is the second elected president, along with Richard Nixon, to see improvement in his approval ratings during his sixth quarter in office. The 2.8-point increase in Trump's approval rating was roughly twice that of Nixon's (56.6% to 58.0%). Trump's job approval has not followed the normal trajectory for presidential approval, and that is one reason for the rare increase in approval at this stage of his presidency. Whereas most prior presidents started with high approval ratings at the beginning of their terms and saw those decline through the second year in office, Trump's started with low approval ratings, but they have been better more recently, likely because of consistent positive economic news.

From a broader historical perspective, Trump's sixth quarter average ranks in the 20th percentile, or bottom fifth, of the nearly 300 presidential quarters in Gallup's polling history.

Trump enjoyed greater public support during his sixth quarter in office than he has to date, helped by a strong economy and some historic, if not universally praised, meetings with leaders of rival nations. But his ratings are still weak in an absolute sense and, in general, below those of his predecessors at similar points in their presidencies.

One major reason Trump's approval ratings have been comparatively worse than previous chief executives is that Trump had no "honeymoon" period of high first-year ratings. Presidential honeymoons are largely fueled by above-average ratings from independents and supporters of the opposition party, but Trump's approval ratings have generally been in the 30% range among independents and in single digits among Democrats since his presidency began.

By the sixth quarter in a president's term, after the honeymoon period is over, most presidents experienced a sharp drop in approval. It has not been uncommon for sixth-quarter presidents to be below majority-level approval, although those presidents tended to be dealing with a struggling economy.

Trump managed to buck the historical trend by showing an increase in popularity during his sixth quarter. Still, that was only enough to have Trump essentially tie for the lowest sixth-quarter job approval rating for an elected president.

Presidents have usually seen continued declines in job approval during their seventh quarters in office, and Carter, Reagan and Clinton had similar averages to where Trump is now. Going forward then, even if Trump's approval ratings remain weak, they may not be as historically unprecedented as his earlier ratings were.

Results for this Gallup poll are based on telephone interviews conducted April 23-July 22, 2018, on the Gallup U.S. Poll, with a random sample of 19,414 adults, aged 18 and older, living in all 50 U.S. states and the District of Columbia. For results based on the total sample of national adults, the margin of sampling error is ±1 percentage points at the 95% confidence level. All reported margins of sampling error include computed design effects for weighting. 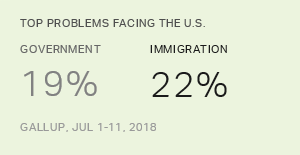 Immigration Surges to Top of Most Important Problem List

The 22% of Americans who name immigration as the nation's most important problem is the highest percentage mentioning that issue in Gallup's history. 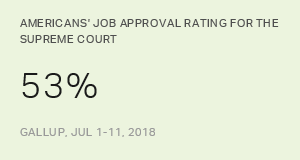 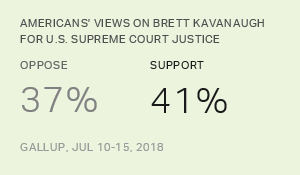