WASHINGTON, D.C. -- Despite a challenging week in which his former lawyer pleaded guilty to federal charges and his former campaign chairman was convicted of eight crimes, Donald Trump's job approval rating and the intensity of Americans' opinions of him are stable. His latest approval rating is 41% and disapproval is 54%. Twenty-seven percent of Americans "strongly" approve of Trump's job performance and 40% strongly disapprove, on par with the three previous readings Gallup has recorded since February 2017, shortly after he took office.

Background: Gallup has measured the intensity of presidential job approval on occasion dating back to 1965, and the latest reading is from an Aug. 20-26 survey. Majorities of both those who approve and those who disapprove of Trump do so strongly. However, a higher proportion of disapprovers (74%) than approvers (66%) feel strongly about their opinions of the president.

In the 84 times Gallup has measured strength of job approval, only two presidents have registered higher strong disapproval than Trump's 40%: Richard Nixon (48% strongly disapproved of Nixon in February 1974, as he was mired in the Watergate crisis) and George W. Bush (44% in February 2006, as opposition to the Iraq War in the U.S. escalated). Both of those readings came during the president's sixth year in office, as did Barack Obama's highest reading of 39% strong disapproval. (Bush also registered 43% strong disapproval in December 2005, at the end of his fifth year.)

Just as the intensity of approval of Trump's job performance has been flat throughout his presidency thus far, there has been little meaningful change in the opinions of key subgroups. 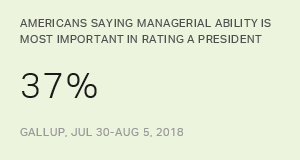 Gallup tracks the percentage of Americans who approve or disapprove of the job Donald Trump is doing as president. Results are based on telephone interviews with approximately 1,500 national adults, with a margin of error is ±4 percentage points.