WASHINGTON, D.C. -- Forty-nine percent of Americans approve of the job the U.S. Supreme Court is doing, its first approval rating below the majority level since 2017. A year ago, 58% approved of the court, the highest Gallup had measured since 2009. 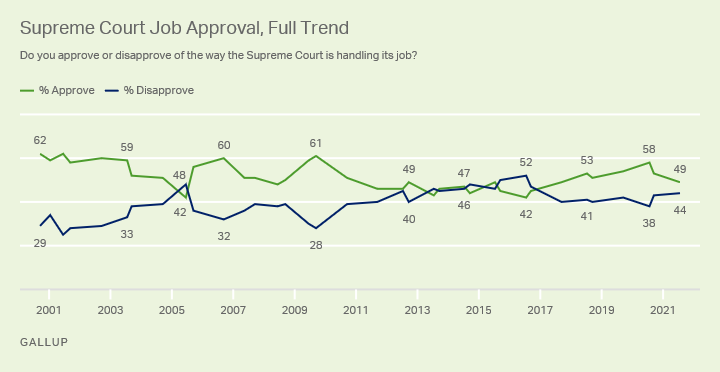 Line graph. Trend in Supreme Court job approval. When Gallup first asked the Supreme Court job approval question, in 2000, a record 62% approved. Approval stayed high until 2005, when more disapproved than approved. From 2006-2011, more approved than disapproved once again, but between 2013 and 2017 opinion was more evenly divided or net-negative. In more recent years, ratings have been better, although the 49% approval rating in 2021 is down from 58% a year ago.

The new reading comes from a July 6-21 Gallup poll, conducted after an eventful Supreme Court term featuring a 6-3 conservative majority since the confirmation last fall of Amy Coney Barrett to replace Ruth Bader Ginsburg. The high court issued a mix of rulings pleasing to both liberals and conservatives. These included: a rejection of a challenge to the Affordable Care Act (the third to reach the court); a ruling upholding an Arizona election law alleged to discriminate against racial and ethnic minorities; a decision that allowed a Catholic social service agency to participate in a foster care program even if it refused to consider same-sex couples; and an extension of free speech rights for students to social media posts.

In addition to the 49% of U.S. adults who approve of the Supreme Court's job, 44% disapprove and 7% express no opinion.

The decline in Supreme Court approval this year mirrors the drop in confidence in the institution measured in Gallup's annual Confidence in Institutions survey.

For most of Gallup's trend, dating back to 2000, more Americans have approved than disapproved of the way the Supreme Court was handling its job, with approval usually above the majority, averaging 52%.

The years 2013 through 2016 were a notable exception, with the public closely divided in its evaluations, during a period when the court struck down prior challenges to the Affordable Care Act and legalized same-sex marriage nationwide. These rulings were deeply unpopular with Republicans, whose approval rating of the Supreme Court slipped to as low as 18% in 2015 after they were handed down.

Overall evaluations of the Supreme Court have improved in recent years, averaging 54% between 2018 and 2020. During this time, Republican approval of the Supreme Court grew after the U.S. Senate confirmed two justices nominated to the court by then-President Donald Trump.

A year ago, after a term that also saw a mix of liberal- and conservative-leaning opinions, approval of the court reached 58%, with an unusually small gap in approval by party.

Two subsequent readings, in September (when overall approval was 53%) and the current reading, have also shown narrow party differences in approval, even after a third Trump appointee, Justice Barrett, was confirmed in October. In the current survey, Republicans and Democrats have identical approval ratings of 51%, with independents slightly lower, at 46%.

Though Gallup continues to see little difference in partisans' evaluations of the court, all party groups have lower approval ratings than they did a year ago, including a nine-percentage-point decline among Republicans, 11 points among independents and five points among Democrats. 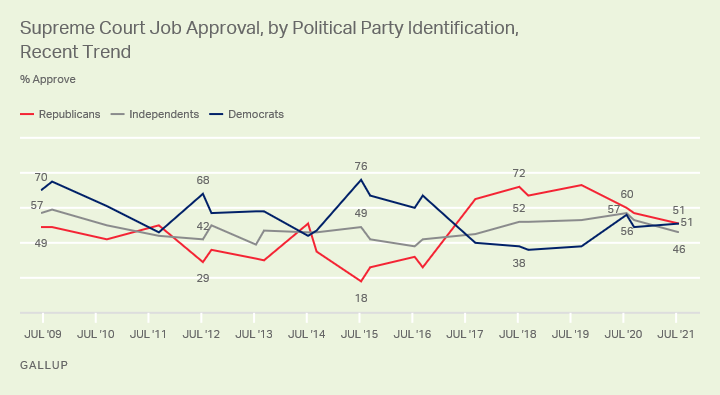 Americans give the Supreme Court its lowest job approval rating in four years. But unlike in 2017, when wide party gaps in ratings of the court drove its approval below 50%, today Republicans and Democrats view it similarly. Bare majorities of both parties approve of the high court, perhaps because it has handed down rulings that have alternately pleased and frustrated both sides of the ideological spectrum.

The mix of rulings may have helped keep Republicans from viewing the court as a conservative ally, or Democrats from perceiving it as too ideologically extreme. If that is the case, it is notable, given that the court now has six justices nominated by Republican presidents compared with three nominated by Democratic presidents.

Today's symmetry in Republicans' and Democrats' ratings of the court may be put to the test in the court's next term. It has already agreed to hear several controversial cases, including a challenge to a Mississippi law that prohibits most abortions 15 weeks after conception. The Mississippi attorney general has asked the Supreme Court to allow the state law to go into effect and overturn the 1973 Roe v. Wade ruling that prohibits states from banning abortion before 24 weeks into a pregnancy.