WASHINGTON, D.C. -- Americans' job evaluations of eight prominent federal government agencies have fallen by double digits since 2019. The largest drop is for the Centers for Disease Control and Prevention, with 40% now saying it is doing an excellent or good job, down from 64% in 2019. None of the 13 agencies measured in both 2019 and 2021 showed an increase in positive job ratings.

Gallup periodically asks Americans to assess how some of the more newsmaking federal agencies and departments are doing. Gallup first asked about NASA in 1990, and then expanded the list to a larger number of agencies in 2003.

Fifteen agencies are included in Gallup's annual Governance survey this year, conducted Sept. 1-17. The prior measures are from April 2019, before the coronavirus pandemic and when the U.S. economy was generally strong.

The CDC's ratings have suffered the most as the nation has struggled to deal with the pandemic among other challenging issues. The leading health agency has been criticized for changing its messages about the best ways for Americans to protect themselves from the coronavirus, particularly regarding the use of face masks.

But the CDC is not alone in suffering a decline in public trust, with the CIA, the U.S. Postal Service, the Secret Service, the FBI, the IRS, the Department of Homeland Security and the Environmental Protection Agency all showing declines in job ratings of at least 10 percentage points.

Many of these agencies have been involved in controversies, including cutbacks and delays in mail delivery for the Postal Service, the influx of migrants at the U.S. Southern border for Homeland Security, and the CIA's assessments of how quickly the Taliban would take over Afghanistan after the U.S. military left the country.

The declines in agency rating may also reflect the negative effects of the pandemic on Americans' views of society and governance, a broader decline in trust in government this year, as well as the recent slide in President Joe Biden's job approval rating.

Americans' ratings of NASA are the highest for any agency, at 60%, and it is the only agency not to show at least a minimal decline in performance ratings since 2019. The U.S. Postal Service (57%) and the Secret Service (55%) -- which were the top-rated agencies in 2019 -- are rated next best, even after large declines for each this year.

The State Department, measured for the first time in the current survey, ranks lowest, with 32% giving it an excellent or good job rating, essentially tied with the EPA (33%). The poll was conducted shortly after the United States' chaotic withdrawal from Afghanistan. The State Department was criticized for its struggles in coordinating the evacuation of Americans and U.S. allies living there.

The Defense Department, another key government actor in the Afghanistan withdrawal, was also included in the survey for the first time and received positive ratings from 46% of U.S. adults.

CDC Among Several Agencies at a New Low

Americans have generally been positive about the way the CDC has done its job historically, across the seven times Gallup has measured its performance. Typically, at least six in 10 U.S. adults say the CDC is doing an excellent or good job. The current 40% is thus a significant departure from the norm, though it is not the only such instance. In addition to the current COVID-19-era measure, ratings also were lower in 2014 (50%), during the Ebola virus outbreak in the U.S. 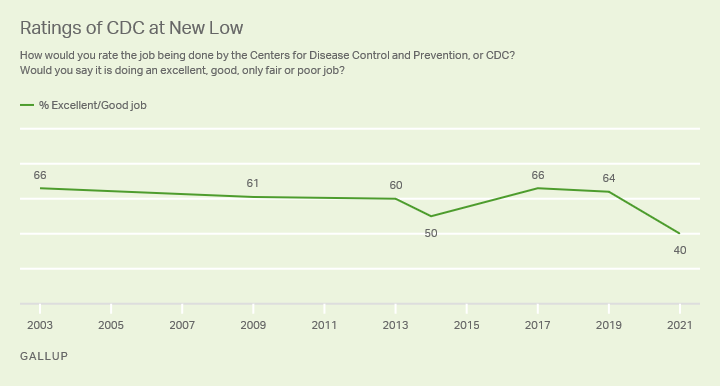 In addition to the CDC, the Department of Homeland Security, FBI, EPA and U.S. Postal Service are at new lows in Gallup's trend. For the full trends on each agency, click on the linked PDF at the bottom of the article.

Republicans Show Biggest Drop in Ratings of Most Agencies

Both Republicans and independents are less positive toward all 13 of the agencies measured in both 2019 and 2021. In contrast, Democrats are more positive toward most of them. The partisan differences to a large degree are a response to the change from the Donald Trump administration to the Joe Biden administration between the two surveys among Democratic and Republican Party supporters.

Republicans generally show the largest declines in agency ratings, most notably for the CDC (down 57 points), but also for Homeland Security (down 41 points), the CIA (down 34 points), the Secret Service and the EPA (each down 29 points). Across the 13 agencies, Republicans' ratings are down an average of 25 points. 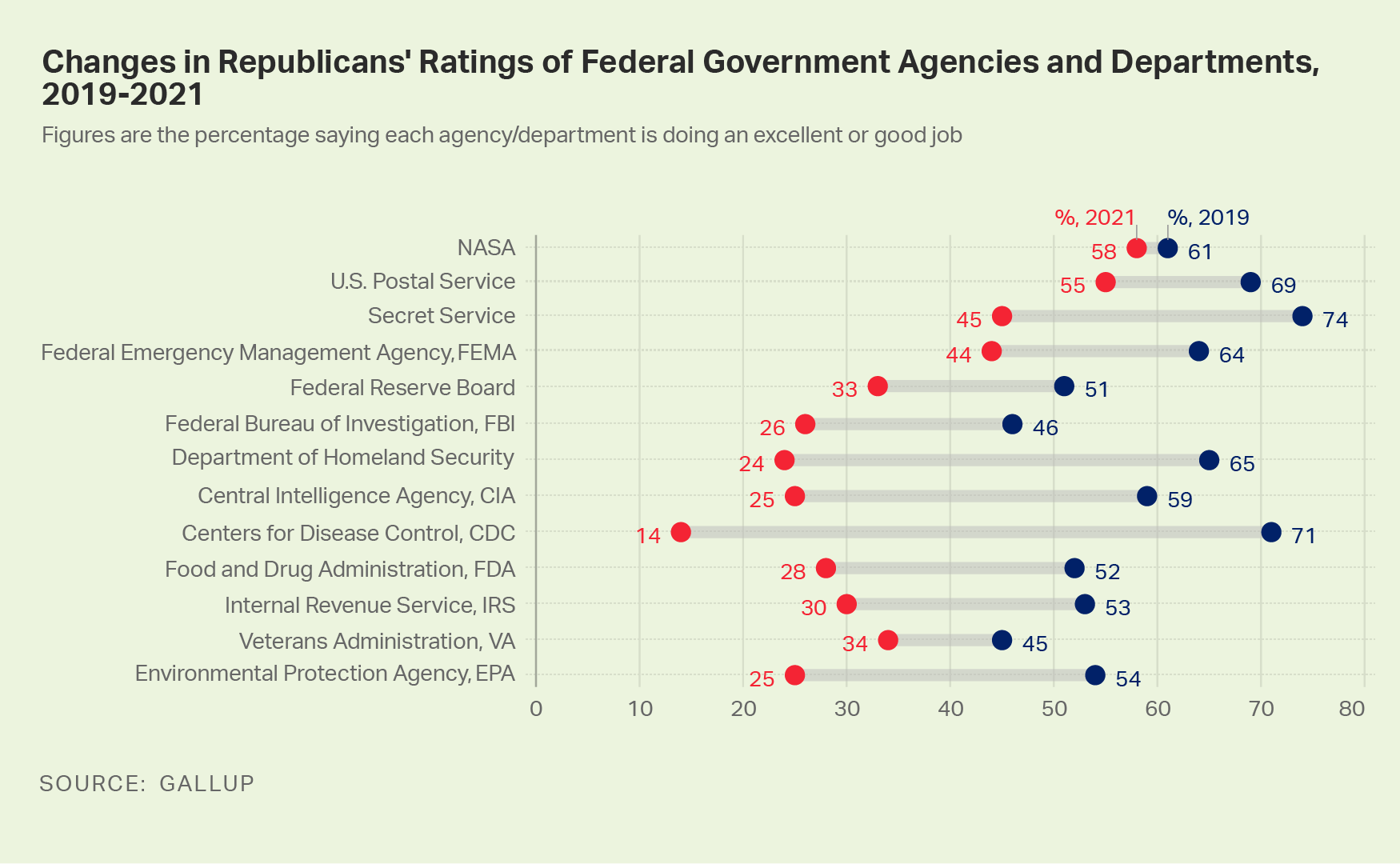 The largest decline among independents is also for the CDC, down 28 points. Independents' ratings of the Postal Service have dropped 21 points, a larger decline for the USPS than among the other party groups. On average across the 13 agencies and departments, independents' scores are down 14 points. 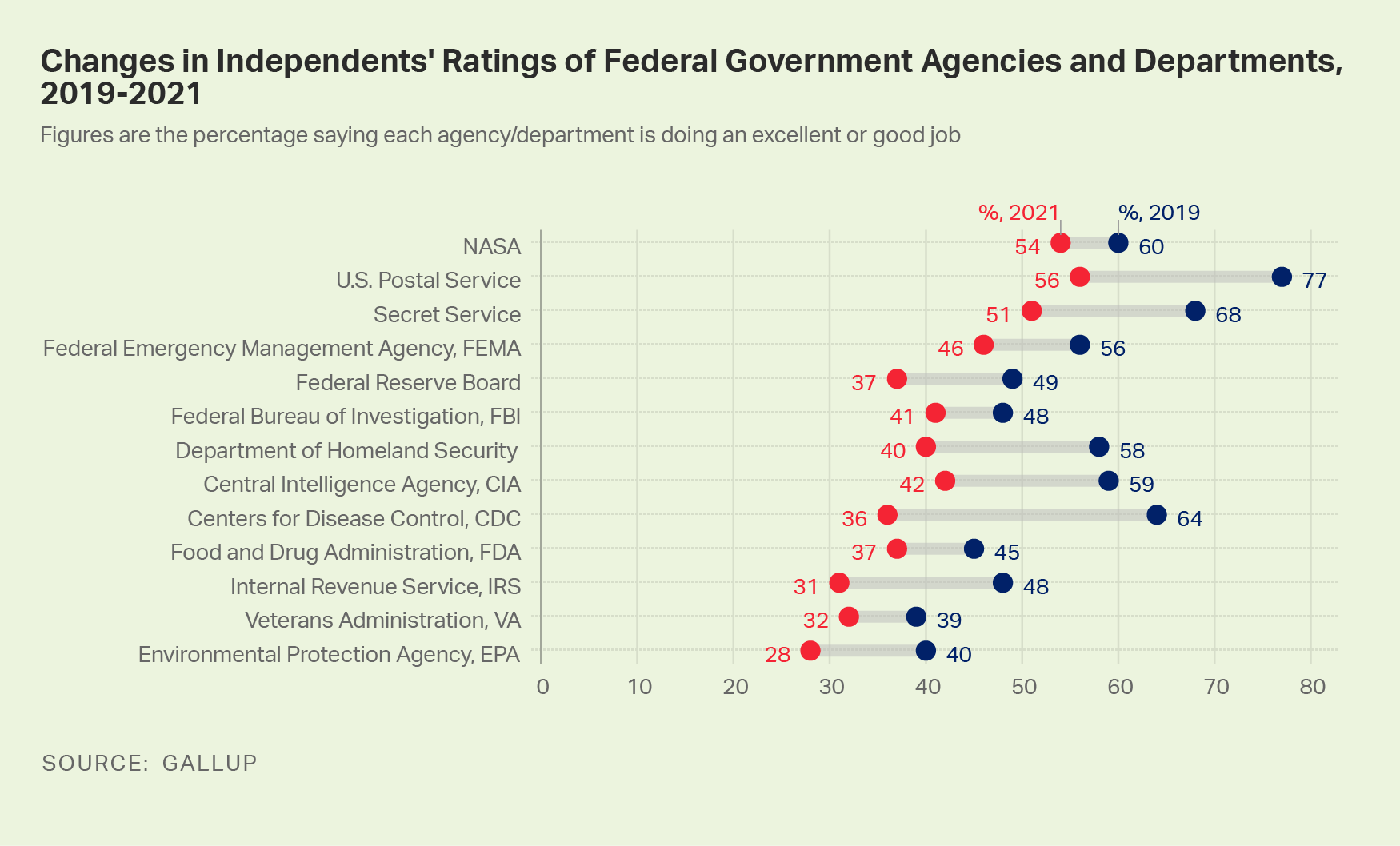 Bar graph. Changes in independents' opinions of the job federal government agencies and departments are doing between 2019 and 2021. Independents are less likely in 2021 than in 2019 to say all 13 agencies measured in both years are doing an excellent or good job. These include a 28-point drop from 64% to 36% for the CDC, a 21-point drop from 77% to 56% for U.S. Postal Service, and an 18-point drop from 58% to 40% for the Department of Homeland Security. The smallest drop was six points for NASA, from 60% to 54%.

Unlike the other party groups, Democrats are more positive toward the CDC now, with 72% saying it is doing an excellent or good job, up from 61% in 2019. Democrats' job assessments of the FDA, FEMA, Federal Reserve and Homeland Security increased even more, by between 19 and 25 points.

The only agency for which Democrats' opinions have deteriorated significantly is the Postal Service, down 16 points.

On average, Democrats' job evaluation improved eight points for the various agencies -- a much smaller change than the decline in average ratings seen among Republicans. 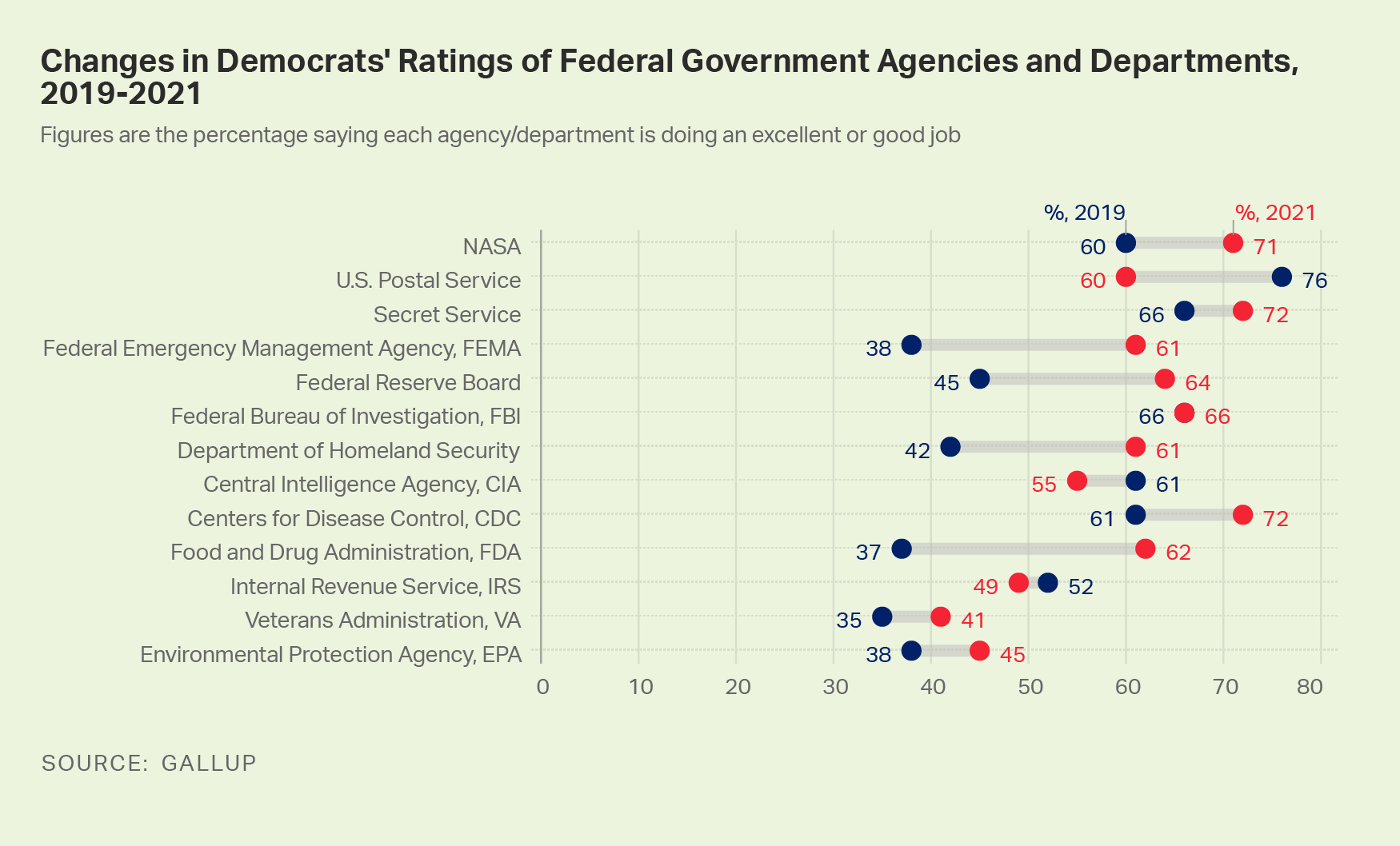 Americans' increasingly pessimistic job ratings of the president, Congress and the Supreme Court that were also measured in Gallup's September poll extend to other parts of the federal government, namely the various federal agencies and Cabinet departments that make up the executive branch of the government. Nearly all agencies Gallup tested are rated worse now than two years ago, and many are at record lows in the 2003-2021 trend.

These declines come during a period that has been trying for the U.S. Among the challenges, the coronavirus pandemic and how to mitigate it may be paramount, but the pullout from Afghanistan, increased crime and violence, a surge of migrants at the Southern border, and improving social justice have all sparked discord in Washington and around the country.

The diminished federal government agency ratings also come at a time when Republicans' trust in the federal government to handle international and domestic problems is the lowest Gallup has measured for any party group historically.

Results for this Gallup poll are based on telephone interviews conducted Sept. 1-17, 2021, with a random sample of 1,005 adults, aged 18 and older, living in all 50 U.S. states and the District of Columbia. For results based on the total sample of national adults, the margin of sampling error is ±4 percentage points at the 95% confidence level.

All agencies except NASA were asked of reduced, randomly selected samples of 700 national adults. For results based on these samples, the margin of sampling error is ±5 percentage points at the 95% confidence level.