WASHINGTON, D.C. -- The world's approval of Germany's leadership during Chancellor Angela Merkel's last full year in office in 2020 hit a new record high, not only for Germany, but for any global leader in more than a decade. The 52% median approval rating for Germany's leadership in 2020 towered above ratings for Russia (34%), China (30%) and the U.S. (30%). 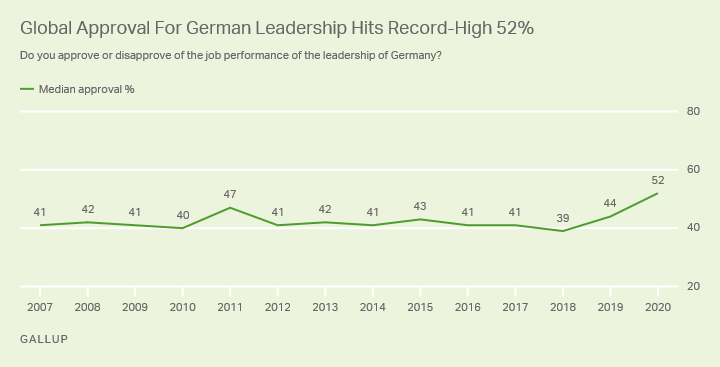 Germany earned this unprecedented rating as Merkel took strong action to combat the COVID-19 pandemic domestically and as Germany had assumed the rotating presidency of the European Union in July 2020. Many had seen Merkel, Germany's first female chancellor, as the key leader in the EU long before the country assumed presidency of the organization. Her departure this year will leave a leadership vacuum, and it is unclear how the next chancellor will step in to fill it.

Approval Rose in Europe and the Americas

Median approval of Germany's leadership increased by 15 percentage points in the Americas between 2019 and 2020. There was a substantially more modest increase of six points in Europe during the same period. In Africa and Asia, there was essentially no change.

Approval of Germany's leadership topped that for the U.S., Russia and China in three of the four global regions. Approval of Germany exceeded that of the other three powers by nine points or more in Europe, the Americas and Asia. Only in Africa was median approval of U.S. leadership (53%) modestly higher than that of Germany (49%).

Approval of Germany's Leadership Up Substantially in 33 Countries

In 33 countries, approval of Germany's leadership increased appreciably -- by 10 percentage points or more from 2019 to 2020. In 11 of those countries -- most of them in the Americas -- the increase was even more substantial, 16 points or more. In Uruguay in particular, approval increased 27 points, behind only Zambia.

Merkel is clearly ending her tenure as chancellor on a high note, with more than seven in 10 Germans approving of the job she has done domestically and record-high median approval for German leadership worldwide. However, the future of Germany's leadership role around the globe is up in the air. In the recent election, in which Merkel did not stand for office, her Christian Democratic Union party lost seats, and it is not part of the governing coalition that is emerging in Germany. This represents the first change in government for Germany in 16 years.

The three-way governing coalition that appears to be emerging in Germany between the Free Democrats, the Social Democrats and the Greens is likely to represent a shift in several policy areas. How much of a shift remains to be seen, and little has emerged concerning how Germany's foreign policy in particular may be affected.

Read more about how the world rates Germany and other world leaders in Gallup's latest report.

Results for the 2020 approval ratings are based on nationally representative, probability-based samples among the adult populations, aged 15 and older, in 108 to 109 countries and areas throughout 2020.

In most countries/areas, surveys were conducted over mobile and landline telephones; some in-person interviews were conducted in Republic of the Congo, India, Mali, Pakistan and Senegal.

Learn more about the 2020 fieldwork.