In 1949, Gallup began measuring Americans' misconceptions about epilepsy -- a common neurological disorder that causes recurrent seizures. The polling was done in coordination with researchers at the National Institutes of Health, and a key question -- which was repeated every five years through 1979-1980 -- was, "Do you think epilepsy is a form of insanity, or not?"

George Gallup originally described the public's 1949 views about epilepsy as "more enlightened," based on only 13% of U.S. adults equating it with mental illness. Another 20% were unsure, while 59% expressly said it was not a type of insanity. Gallup went on to say about the 1949 results:

"Because of the dramatic nature of the seizures or fits in epileptics, people for centuries believed that victims of the disease were "possessed of devils," that the gods actually took hold of a person and shook him (hence the term "seizure"), or that epilepsy was a form of insanity. A nationwide survey of attitudes toward epilepsy shows that comparatively few persons cling today to such unfounded notions."

In retrospect, the combined 33% of Americans in 1949 who either believed epilepsy was a form of insanity or were unsure seems substantial. The poll also found 24% saying they would object to children of theirs being in school or playing with a child who sometimes had seizures. Further, 35% thought that people with epilepsy should not "be employed in jobs like other people."

By 1954, the total percentage of Americans viewing epilepsy as a form of insanity or who were unsure had fallen to 22%, and by the 1970s it was down to just under 10%. There were similar declines in prejudice toward people with epilepsy on the other measures, and in his final release on the subject in 1980, Gallup declared, "The public's views on epilepsy have undergone profound changes over the last three decades."

Whether views have changed further is unknown. Gallup stopped asking the questions once it was clear the ancient stigmas associated with epilepsy were fading out.

Right at the start, a majority of Americans suspected there was more to John F. Kennedy's assassination than met the eye.

In 1953, Gallup found 69% of Americans in favor of adding the words "under God" to the Pledge of Allegiance, while 21% were opposed.

Gallup Vault: Issue of Gays in Military Split Americans in 1993

In 1993, Americans had a mixed response to easing restrictions on gays serving in the military, and both sides felt strongly about their view. 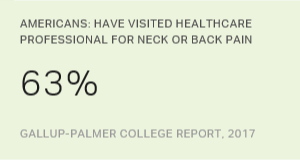 Many adults in the U.S. suffer from back pain. Most prefer to try non-drug treatments to manage it.