Gallup polling in nine countries leading up to the 1988 Summer Olympics in Seoul, South Korea, found 82% of South Koreans believing the games promote good relations among the participating countries, well ahead of the 55% saying this in the U.S.

Great Britain and West Germany lagged the United States in giving the games a positive review, with 43% and 39%, respectively, believing they improve relations.

No more than 6% of residents in any of the countries surveyed in 1988 thought the Olympics worsen relations. Rather, the vast majority of those who didn't think the impact was positive said the games made no difference.

George Gallup Jr. and Alec Gallup, authors of the Sept. 12, 1988, Gallup news release on this poll, noted that in spite of past controversies, residents of all nine countries surveyed in 1988 favored having the Olympics' location continue to rotate rather than having a permanent site. In their words:

"The American boycott of the 1980 Moscow Olympics and the Soviet Union's withdrawal from the 1984 Los Angeles Games heightened demands for reform, including the proposal -- endorsed by Presidents Carter and Reagan -- for a permanent home for the Olympics in Greece, where the ancient games and several of the early 'modern' Olympics were held. This proposal currently has relatively little public appeal in any of the nations surveyed, with large majorities preferring that the games continue to move from country to country every four years."

Read more about Gallup polling on the Olympics.

View the original 1988 Gallup news release on how the Olympics affect country relations. 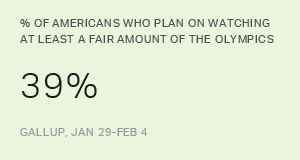 Fewer Americans Plan to Watch Olympics Than in Past

Four in 10 Americans intend to watch at least a fair amount of the Winter Olympics, a lower percentage than for past Winter Games. 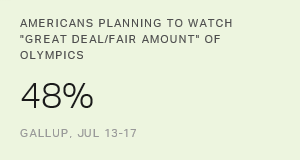