Most business and government leaders know employee engagement can improve key business outcomes, including productivity and growth. Gallup's work with a police force in Latin America shows that when it comes to the crucial task of protecting citizens' safety, maintaining high levels of engagement may literally save lives.

In 2009, a police force in a large Latin American country beleaguered by high crime rates began to focus on its own organizational challenges. Despite substantial accomplishments in curtailing violence in its region, the corps suffered from low morale and poor relations with community members -- factors that limited its ability to make sustainable headway against rampant street crime and organized crime interests.

Senior leaders realized that the corps needed to overcome the legacy of a militaristic, results-at-any-cost mindset that often led to undue pressure in the workplace, frequent personnel relocations and lack of regard for officers' work-life balance. This excessive operational focus also led to behaviors that hurt the corps' relationship with local communities and damaged its reputation locally and in the international human rights community. To counteract these problems, leaders undertook a change initiative centered on the concept of "humanism" -- showing respect for the dignity of members of the police force themselves and for that of the general public.

Human Relationships Are Central to the War on Crime

Operationally, the corps' initiative resulted in two guiding objectives. First, building a more effective police force meant transforming the organizational culture to one more likely to inspire loyalty and an unshakeable sense of purpose among front-line patrol police who put themselves in harm's way every day. It also required changing the corps' public image to create more humane, trust-based interactions between the police and the citizens they serve.

As the corps' top leader notes, this meant the organization had to build a new model for human resource management. "This is not easy in a [situation] like ours," he says. "Our institution is undoubtedly facing the greatest demands in terms of results due to the special crime conditions. However, the quality of human relationships is vital when it comes to providing the public with a service in this very demanding environment."

In 2011, the corps enlisted Gallup to help improve employee engagement among its police force. In the first wave of this program, more than 3,000 senior officers and 4,000 patrol police took the Q12 employee engagement survey and participated in action-planning sessions based on the survey results. Gallup analysis showed that operational units led by highly engaged senior officers had the best reduction in high-impact crime rates, were involved in fewer disciplinary investigations and achieved better citizen satisfaction scores than operational units led by less-engaged senior officers.

The improvement in citizen satisfaction scores is particularly important as the force relies on community members to report crimes and provide other essential information in the effort to maintain law and order. Those efforts include making the police more accessible to the public through foot patrols and in-person visits and establishing new ways for citizens to communicate with the police -- through local hotlines and social media channels, for instance. "We have clearly seen that members of the public who trust their police officers will show their support by working with them to improve the safety of their neighborhood and their community, making the work more effective by acting together," the corps' leader says.

In 2012, more than 5,000 corps members took part in the Q12 survey, and in 2013, more than 4,000 did; each wave was accompanied by a change initiative designed to improve employee engagement. Among officers who participated in all three waves, average ratings rose significantly on several key aspects of engagement, including receiving recognition or praise for doing good work in the last seven days.

The corps' leader stresses that recognition systems are particularly important. "To achieve emotional engagement, we have to -- as a society and as an institution -- make police officers feel that their efforts are valued. This is why it is very important for us to recognize a job well done," he says. "We highlight heroic acts, spontaneous acts of service, to show younger members of the police force that the service we provide offers huge emotional rewards, rewards that cannot be bought with money."

While the corps' leader welcomes these successes, he notes that broader initiatives are needed to curtail entrenched criminal elements and strengthen the rule of law. "We are an institution that is growing in terms of its engagement, but we need all the institutions involved in the justice system to be equally engaged," he says. "We must all work toward a credible scenario with a greater sense of justice and security. When crime goes unpunished in a society, this is a tacit invitation to engage in criminal behavior."

Progress and Prosperity Are Built on Public Safety

In many Latin American countries, improving security conditions is a fundamental prerequisite to social and economic progress. Law and order is the first step in Gallup's macroeconomic path -- a conceptual framework for successful societies. Across 20 Latin American countries included in Gallup's 2013 World Poll, 46% of residents said they feel safe walking alone in their area at night, while 52% said they did not. Results for this police force's specific country are similar. Fear for their own safety often keeps residents from attempting to build better lives for themselves and their children.

The corps' leader notes that giving hope to the country's most vulnerable residents has become central to the force's mission. "Humanism is seen in the ongoing effort of police officers to help the most defenseless, the most in need, in parts of the country where there is no state presence in terms of health, education or basic services," he says. "Because one of our service principles is solidarity, each day police officers genuinely feel they have achieved self-realization by serving those most in need."

Paradoxically, the most important gains are reflected in crimes that don't happen -- the home that doesn't get robbed, the kidnapping or assault that doesn't take place, thanks to the presence of a highly effective police force that is fiercely committed to protecting public safety. In 2014, the corps has seen a substantial reduction in homicides compared with last year.

Results like these are gratifying, but the corps' leader notes that the public gratitude the progress engenders is even more rewarding. "One of the most wonderful things we can experience as police officers is spontaneously being thanked by members of the public who we have protected, who we have allowed to sleep peacefully in their beds, to have a problem-free journey to work," he says. "[This happens] because of the work of a police officer who has been moved by his or her genuine spirit to serve, who is engaged from the heart."

Steve Crabtree is a Senior Editor and Research Analyst at Gallup.
Jesus Rios is Regional Director, Latin America, at Gallup.
Victoria Revelo is a Consultant at Gallup.

U.S. Confidence in Police About Average for Wealthy Countries

Among the 34 OECD member states, a median 74% of residents say they have confidence in their local police. The U.S., where this question was last asked in December 2013, falls in the middle of the pack at 78%. 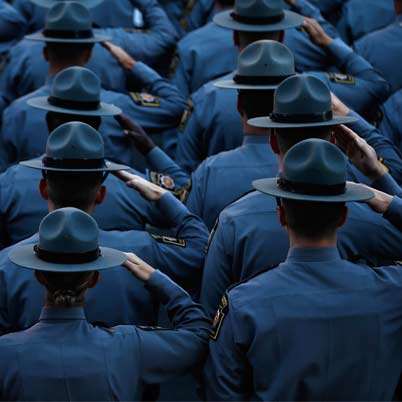