While Americans may be politically polarized, they have found consensus in one area: the need for the U.S. to invest in the talent of its workforce. Such was the key finding of a recent Gallup-Lumina Foundation Poll.

Gallup asked respondents to think about talent as "the knowledge or skills people develop or obtain through education, work or other life experiences." Nearly eight in 10 (78%) U.S. adults agree, "if the U.S. fails to develop a more talented workforce, it will fall behind other countries." An overwhelming majority (87%) agree, "the federal government should make it a high priority to increase the talent of our nation's workforce," and 89% agree with the statement "cities that commit to increasing talent among their citizens are more likely to have stronger economies, better quality of life and greater prosperity than cities that do not." Clearly, there is strong support among the American public for these statements.

What's surprising, though, is the widespread agreement with these statements among various demographic groups. For example, when asked if the federal government should make it a high priority to increase the talent of the U.S. workforce, there are no differences in agreement with this statement among racial groups (87% of whites and 88% of nonwhites agree) or income groups (89% of households making less than $24,000 per year and 89% of households making more than $90,000 agree).

When asked whether they agree that cities committing to increasing talent among their citizens are more likely to have stronger economies, there is unmistakable consensus between whites (91% agree) and nonwhites (88% agree), and among Democrats (90% agree) and Republicans (89% agree).

Debates rage about the affordability of and return on investment in higher education as tuition rates continue to increase. Yet the poll finds there is strong support for "redesigning the nation's higher education system to better meet students' needs" as a means to increase talent in the U.S. Overall, 85% of U.S. adults agree with this statement, with no meaningful differences between whites (84%) and nonwhites (88%), nor between college graduates (87%) and those without a college diploma (84%).

At a time when Americans are greatly divided on various aspects of life related to politics, education, and racial and income inequality, there is harmony to be found in the public's agreement on the importance of investing in the development of talent in the U.S. workplace. Americans not only see investing in the knowledge and skills of the U.S. workforce as a priority in general, but also something for which the federal government and local communities should step up their efforts.

Results are based on telephone interviews conducted July 6-7, 2015, with a random sample of 1,010 adults, aged 18 and older, living in all 50 U.S. states and the District of Columbia. For results based on this sample of national adults, the margin of sampling error is ±4 percentage points at the 95% confidence level.

Cities: Where Good Jobs Are Created

Fixing major economic problems and winning the global war for good jobs can only be accomplished one city at a time, says Gallup's chairman. Washington won't have the answers. All solutions are local. 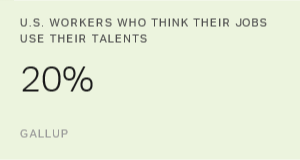