Volkswagen is a brand in crisis.

As is now widely known, in September, the automaker admitted to rigging its cars with software designed to cheat emissions tests -- a problem affecting up to 11 million cars worldwide -- setting the stage for a massive recall. Volkswagen has taken various steps to mitigate the scandal, including issuing a public apology and providing a goodwill package to affected customers. But the iconic brand may need to do a lot more to repair its tarnished image.

Vehicle recalls are themselves nothing new. In 2014, the National Highway Traffic Safety Administration reported a record 64 million recalls, ranging from the mundane to the dangerous. But the Volkswagen recall has drawn greater attention than most, inspiring a heightened sense of disdain for the company's actions. In many cases, when automakers issue a recall, it's because of a mistake or error on their part. In this instance, however, Volkswagen deliberately chose to deceive customers. And that seems to be the true sticking point, especially for a company that touted itself as environmentally friendly and invested $77 million in an advertising campaign to promote its clean diesel cars. What Consumers Now Think of Volkswagen

Gallup recently conducted a study to find out what consumers think of Volkswagen in the wake of the scandal and how the company's business may be affected by its actions. Previous Gallup research has shown that a company's brand can be a powerful determinant of its business performance. When customers are aligned with a brand, they give it twice as much share of wallet as those who are not aligned with that same brand. Already, Volkswagen has seen its monthly sales slow and its market share drop.

Overall, Gallup found that the public's awareness of the Volkswagen scandal is high, with three-quarters of respondents saying they are familiar with the news. Four in 10 (41%) say the news makes them less likely to purchase a Volkswagen, while 29% say the news has no impact on their purchasing decision. It is also worth noting that 28% of respondents report they would never have considered buying a Volkswagen prior to the news, thus the scandal had no impact on their purchasing decision.

When it comes to Volkswagen's reputation, the majority of consumers (69%) believe the emissions scandal will have a major or moderate impact on its brand. Gallup also asked respondents to use three words or short phrases to describe the Volkswagen brand. Based on a brand analysis, Gallup determined that Volkswagen's desired or projected brand could most accurately be described using words such as "reliable," "fun" and "environmentally friendly." A mere 1.6% of respondents used these or other keywords that aligned with the Volkswagen brand. However, 16% used words such as "dishonest," "liar" and "cheater" to describe the company's brand. How Volkswagen Can Restore Its Brand

To fully restore the Volkswagen brand to its former glory, the company should focus on a strategy aimed at restoring trust with all its customers. This strategy must be driven by three components:

Show customers they matter. Volkswagen has publicly apologized for violating its customers' trust and taken initial action to try to redeem itself. Recently, it began running ads in major U.S. newspapers emphasizing its commitment to "making things right." But for some customers, these efforts aren't enough, and they don't believe they are getting the full story -- or the treatment or restitution -- they deserve.

Volkswagen cannot dismiss its customers' feelings nor try to implement a quick or superficial fix. It should be transparent in informing customers about what's happening and how it plans to mend its broken relationships. The company-customer relationship is an emotional one, and Volkswagen customers feel betrayed. Saying "I'm sorry" won't be enough for everyone; customers want to know that Volkswagen is truly remorseful and taking steps to right its wrongs.

Clean up internal problems. Volkswagen should take an in-depth look at its culture to determine what led those responsible to act as they did. Volkswagen has been pursuing an ambitious growth plan, and employees may have felt pressured to help the company meet its goal no matter what. Gallup has seen this play out in other organizations, particularly when looking at a company's performance management. A company can say it has a certain brand promise or set of values, but aggressive sales or growth goals often come with demands to win at any cost. Volkswagen may need to return to the company's core beliefs and begin to intentionally align its culture with them.

Begin to deliver on the brand promise -- quietly. Grandiose declarations can be off-putting to the public. They can also set up companies for failure when businesses promise too much, too soon while lacking the internal and external structure to support those promises. Volkswagen can recover from this scandal and regain customers' trust, but the company should take the long view. Brands are not built -- and certainly not rebuilt -- in a day. Banks, for example, have a better reputation with consumers than they did during the financial collapse, but consumers still do not view them as positively as they did before the collapse.

Consumers relate to a company through their emotions, and consumer trust must be earned. Volkswagen should decide what it wants to be, build a culture to support that vision and then begin to deliver consistently on its brand promise.

Results are based on a Gallup Panel Web study completed by 1,606 national adults, aged 18 and older, conducted Oct. 13-19, 2015. The Gallup Panel is a probability-based longitudinal panel of U.S. adults whom Gallup selects using random-digit-dial phone interviews that cover landlines and cellphones. Gallup also uses address-based sampling methods to recruit Panel members. The Gallup Panel is not an opt-in panel, and Panel members do not receive incentives for participating. The sample for this study was weighted to be demographically representative of the U.S. adult population using the most recent Current Population Survey figures. For results based on this sample, one can say that the maximum margin of sampling error is ±2.4 percentage points, at the 95% confidence level. Margins of error are higher for subsamples. In addition to sampling error, question wording and practical difficulties in conducting surveys can introduce error or bias into the findings of public opinion polls.

The Power of the Employee-Customer Encounter

Fostering the deep -- and potentially profitable -- emotional connection between a company's employees and its customers must be central to what every leader thinks about every single day.

Do Consumers "Get" Your Brand?

It's not enough for organizations to communicate a brand identity and promise, say two experts. They must align it externally in the marketplace and internally in the workplace. 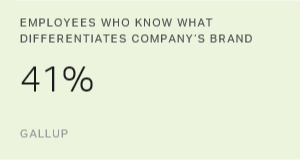 Less than half of U.S. employees strongly agree that they know what makes their company's brand different from that of competitors.