Americans' daily recall of having read, seen or heard about Hillary Clinton dropped off some this week, with the rolling seven-day average moving from as high as 82% at the end of last week to 78% as of Thursday, Oct. 6. Clinton's highest rolling average of 84% came in mid-September during her health crisis.

There has been less drop-off in recall about Donald Trump this week. Trump's rolling average of 85% measured over the weekend was the highest Gallup has measured, and by Thursday night it had edged down only to 83%.

In short, after Clinton gained the upper hand in terms of Americans' reports on hearing about her in the news, Trump reclaimed his customary position as being more in the consciousness of the public than Clinton last week and has held onto that so far this week. Several factors may help explain Trump's higher salience for the average American over the last several days. Although polling data show that Americans believe Clinton won the Sept. 26 debate, Trump kept himself in the news thereafter, continuing to re-litigate some of the topics mentioned in the debate -- including past comments that a Miss Universe candidate was overweight and further thoughts on the subject that he famously tweeted late last Thursday.

Then came the tax return story. The New York Times on Saturday posted a story on its website detailing Trump's 1995 income tax returns, showing that Trump took a $916 million loss that year which allowed him to avoid paying income tax and spurred associated speculation it may have additionally allowed him to pay no taxes for many years past 1995.

This tax story clearly grabbed the attention of many Americans this week. Over Sunday to Thursday night, the word "tax" was by far the most common word used by Americans when describing what they recently read or saw about Trump, used nearly three times more than the next most common word ("debate"). Indeed, of the top-five most commonly used words in this context, four of them referenced this topic, including "pay," "return" and "income."

Generally, the prevalence of the references to Trump's tax returns overshadowed attention paid to other events, such as the vice presidential debate on Monday, the Miss Universe comments and other controversial remarks made by Trump on Monday about veterans with PTSD. But these did not go entirely unnoticed, and, in particular, the widely praised performance of Trump's running mate, Mike Pence, in Monday's debate received several approving remarks. Some respondents mentioned Pence by name.

By contrast, the performance of Clinton's running mate, Tim Kaine, in the vice presidential debate received no mention over the entire week. Though the word "debate" was the most common word used by Americans when describing what they read, saw or heard recently about Clinton, a significant amount of these comments were referencing Clinton's first presidential debate performance or her upcoming one this Sunday.

From a broader perspective, the following graphs show the general trends in major categories of words used in recall of what people had read, seen or heard about Clinton and Trump since July. As noted, people clearly saw Clinton as winning the Sept. 26 debate, and the news narrative has been that she has expanded her lead in key state and national polls since. Gallup's update on the favorable ratings of the two candidates shows a very slight improvement in the image of Clinton since the seven days immediately prior to the debate (the first point on the left of the accompanying graph) with very little change in the percentage of Americans with a favorable image of Trump. 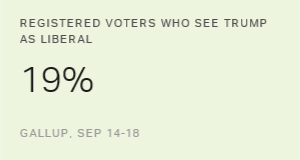 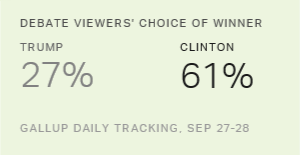