In its end-of-year issue, Time magazine rather unsurprisingly named Donald Trump its "Person of the Year." More surprisingly, there was a subtitle under Trump's cover photo that stated, "President of the Divided States of America."

Time ran no such subtitle when it recognized George W. Bush in 2000 or Bill Clinton in 1992 with its Person of the Year designation. Yet those presidents were elected, respectively, by a slim margin in the Electoral College or with less than 50% of the vote.

In fact, the popular-vote margin has been less than three percentage points in three of the past five elections, and it hasn't come close to the traditional "landslide" threshold of 10 points since 1996, when Clinton beat Bob Dole by nine points.

Further, the average major-party popular-vote percentage over the last five presidential elections -- since the eve of the 21st century -- has been 48% for Republican Party candidates and 50% for Democratic Party candidates. So to say the outcomes in recent U.S. elections have tended to be close is the understatement of the new century. Barack Obama's win in 2008 is really the lone exception.

On this basis, Time's premise that the country is divided has been mostly true since 2000 and is thus not new in 2016.

But as Inauguration Day nears, these cries of division tarnish the peaceful transfer of power that will occur on Jan. 20. These claims deserve a harder look.

One way to understand the country is to dig beyond the vote and look at issues.

Americans certainly agree on one thing -- that the country is on the wrong track. According to Gallup's measure of national mood, more than seven in 10 U.S. adults in 2016 (71%) believed the country was headed in the wrong direction. Only 27% felt satisfied with the way things were going in their country. Moreover, dissatisfaction ran high in both the 30-state bloc Donald Trump won (73% dissatisfied) as well as in the 20-state bloc plus the District of Columbia that Hillary Clinton won (68% dissatisfied).

In fact, for almost 10 years before the 2016 election, there had been a sustained, year-by-year 70%-plus majority feeling the nation was off course. This long-term national dissatisfaction trend obviously served as an incubator for potential regime change in any election and helps explain the election of an outsider like Trump on Nov. 8, 2016. Trump States and Clinton States Disagree on Some Issues

Analysis of Gallup polling on a range of policy issues in 2016 documents several areas where residents in states that went for Trump versus those that went for Clinton are at odds. Trump states, for example, lean pro-life over pro-choice (51% vs. 40%) while the Clinton states lean pro-choice (58% vs. 37%). More generally, those living in Trump states want the government to promote "traditional values"; Clinton state residents want the government to avoid favoring any set of values.

Residents of Trump states see too much government regulation, view large numbers of refugees entering Europe and North America as a threat to vital U.S. interests, express less concern about climate change and disapprove of Obamacare. Less than half in the Clinton states see these issues the same way. All of these are public policy issues on which Trump could take immediate action as president.

Additionally, 42% of those in the Trump states believe the Supreme Court as it is currently configured is too liberal whereas only 16% consider it too conservative. Residents of the Clinton states are divided over whether the court is too liberal (29%) or too conservative (26%). Hence, residents in the Trump states are, on a relative basis, more unified in favoring a particular Supreme Court course correction.

At the same time, Gallup polling reveals large agreement among Americans living in Trump states versus Clinton states on some important matters. They share the belief that healthcare costs are too high, that Iran's nuclear weapons pose a critical threat to the U.S., that the position of the U.S. in the world is not up to par, and that it's important for the country to be the world's top military power. These are all areas where blue and red America could hypothetically come together to encourage Washington, D.C., to take appropriate action.

Notably, Trump and Clinton states are also united in their opposition to one of Trump's signature campaign issues -- building a wall along the border with Mexico. Sixty-three percent in the Trump states and 70% in the Clinton states oppose this.

The supposed two Americas also fall on the side of favoring marijuana legalization, favoring the death penalty, believing the federal government has too much power and opposing laws making it illegal to sell semi-automatic guns -- although the gap between the groups on this last issue is a fairly large 17 points.

On the once-contentious issue of gay marriage, majorities in Trump states as well as Clinton states say it should be legal -- although there is a 19-percentage-point gap in support. The majority in both state blocs view foreign trade as more of an opportunity for economic growth than as a threat from foreign imports.

While a majority of Americans since 2004 have seen the country as divided, the current percentage is significantly higher than measures in that year and in 2012. This contrasts with polling conducted in the immediate aftermath of the 9/11 terrorist attacks and in 2002, when a majority said the country was unified. But before that galvanizing event, the perception that the country was divided was the norm.

The Nov. 8 election demonstrated how evenly divided the country is in terms of actual voting, possibly reflecting many core value differences between the Trump and Clinton states, as well as differences on select key policy preferences for the country.

Still, Gallup data indicate that while disunity prevails on some issues, there is solid national unity on many others. It seems the election exposed the differences between the Trump and Clinton states more than it highlighted the similarities. In the end, whether the country can be called "divided" is a matter of whether one focuses on election outcomes or issues and, in turn, which issues one chooses to emphasize.

Time may have gotten it partly right. But calling the nation "divided" fails to convey the nuances of public opinion, and the extent to which the Trump and Clinton states broadly agree. Given the acrimony over the areas of disagreement -- acrimony fostered by a media that wants to declare the country divided -- Trump's presidency will put Americans' willingness to unite for common goals to the test. 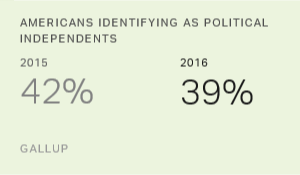 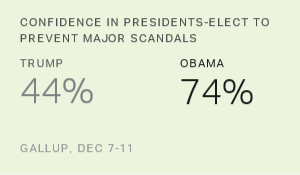