Trump's three-day reading prior to Friday's events was 41%. His previous low point was 37%, recorded March 16-18. His highest reading was 46% in the week following his Jan. 20 inauguration, and he has averaged 42% for his term to date.

Presidential job approval ratings are fluid, and all presidents have seen both upward and downward swings in their ratings at various points in their administrations -- a historical precedent indicating Trump's approval could drop further or recover in the weeks and months ahead. An encouraging sign for Trump, perhaps, is that all presidents whose ratings fell below 36% -- with the exception of Nixon -- saw their ratings improve thereafter. Clinton provides a particularly relevant example. His approval rating dropped to 37% in June 1993 but recovered to 56% by September of that year. 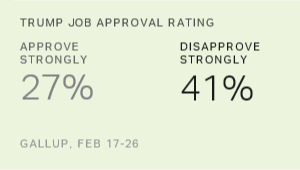