skip to main content
Economy
In U.S., Fewer Believe "Plenty of Opportunity" to Get Ahead

PRINCETON, NJ -- Fewer Americans believe there is "plenty of opportunity" to get ahead in America today than have said so across three previous measurement points over the last 59 years. A bare majority (52%) say the country has plenty of economic opportunity, down from 57% in 2011 and more substantially from 81% in 1998. 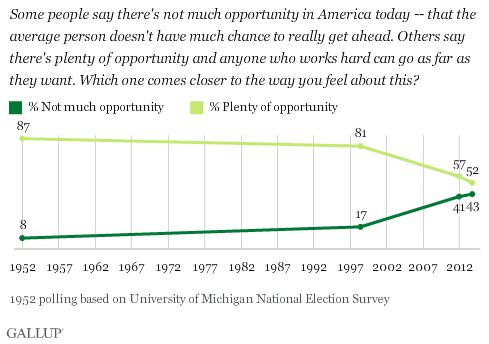 These results come from a Sept. 25-Oct. 2 poll that updated several long-standing trends relating to Americans' views of economic opportunity.

While the U.S. has historically prided itself on its open-ended economic mobility -- celebrating famous "rags to riches" stories like those told by Horatio Alger or lived by Oprah Winfrey -- rising income inequality and abnormally high unemployment rates have caused some to call into question just how accurate this nationally cherished belief is. Along these lines, many politicians have focused on reducing societal inequality as a key part of their policy initiatives, and President Barack Obama has repeatedly called for creating a society that allows ordinary Americans to have more of a chance to succeed.

Obama has also spoken frequently about the need for a "fairer" society -- one in which the prospect of social mobility and the ability of all groups in society to get ahead is spread equally. American attitudes about this aspect of U.S. society have changed significantly over the past decade and a half. Today, just half say "the economic system in the United States is basically fair, since all Americans have an equal opportunity to succeed," while 44% instead see it as basically unfair, and lacking such opportunity. This is a significant change of attitudes compared with the economically heady and dot-com boom year of 1998, when nearly seven in 10 Americans saw the economic system as fair.

Belief that the U.S. economy is rooted in fairness is strongly tied to partisan identification. Currently, Republicans are most likely to see the economy as basically fair, while Democrats are the least likely. Although all partisan groups are less likely now than in 1998 to say the economy is fair, Democrats are slightly more likely to have lost faith, with a 20-percentage-point drop, compared with losses of 16 points among independents and 14 points among Republicans. 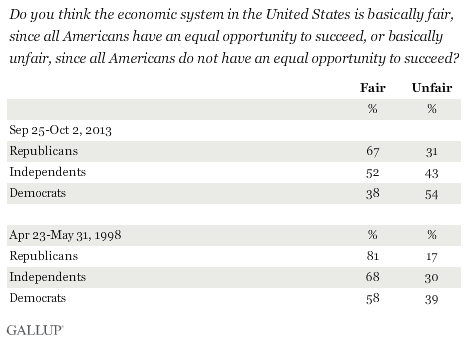 Both lower-income Americans making less than $36,000 a year and higher-income Americans making at least $90,000 are significantly less likely than those in the middle-income group to say the economic system is fair. Thus, despite the focus on the middle class' inability to get ahead today, those in the middle of the income spectrum are actually the most positive about equal opportunity to succeed.

Views That Today's Youth Will Have a Better Life Are Low, but Not Historically So

About half of Americans believe it is very or somewhat likely that today's youth will have a better life than their parents. This figure is roughly in line with where it has been since October 2010, and roughly similar to points in 1995 and 1996, but below the level of these positive attitudes in a broad period from 1998 through early 2010. In 2008, for example, just before the mortgage crisis and recession, 66% of Americans thought the next generation would be better off, and those positive attitudes were an extension of even more positive ones at points going back a decade. Thus, Americans' views of the prospects for the next generation, quite positive from the late 1990s through 2010, have essentially dropped back to the more negative views held in the mid-1990s. 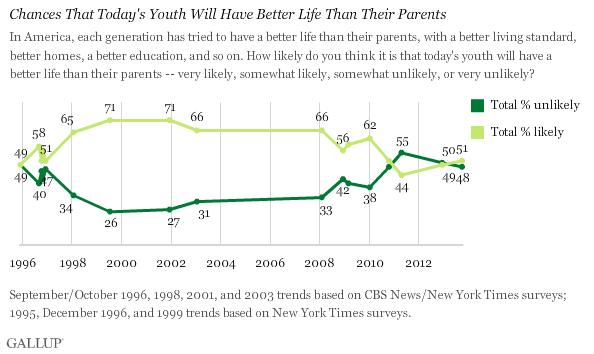 Underpinning this declining sense of economic mobility is the question of whether the economy operates on the principal of fairness -- that hard work will pay off and that individuals, no matter their background, can succeed with enough effort. Only half of Americans today subscribe to this idea, far fewer than was the case 15 years ago. This could mean that for a large swath of the country, one of the essential aspects of the American dream -- limitless economic opportunities -- seems strangely foreign.

Results for this Gallup poll are based on telephone interviews conducted Sept. 25-Oct. 2, 2013, on the Gallup Daily tracking survey, with each question asked of a randomly selected quarter sample of approximately 1,000 adults, aged 18 and older, living in all 50 U.S. states and the District of Columbia.