WASHINGTON, D.C. -- Americans continue to see the Democratic and Republican parties unfavorably, as a year marred by high-profile policy failures for both parties comes to a close. The Republican Party's favorability has improved slightly to 32% from an all-time low of 28% in October during the government shutdown, while 61% now view the GOP unfavorably. The Democratic Party -- on the defensive recently for the flawed rollout of the healthcare website -- maintains a favorable rating of 42%. But a majority of Americans, 53%, now see the party unfavorably, up from 49% in October. 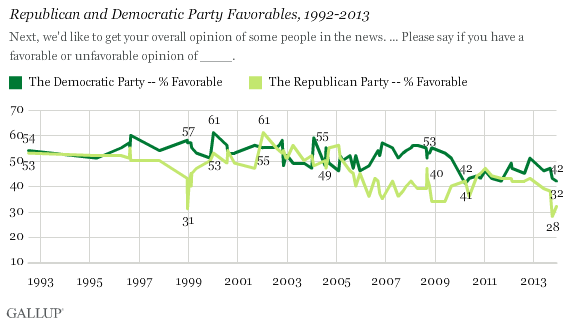 These results come from a Gallup poll conducted Dec. 5-8. Other polls have found Democrats losing a once-substantial advantage in the generic congressional ballot for the 2014 midterm elections; nevertheless, Gallup finds that, overall, Americans still view the Democratic Party more favorably than the Republican Party.

The two parties' favorability ratings are at the lower end of the range Gallup has measured for each, although the GOP has the lower absolute rating. The Democratic Party's current favorability rating of 42% is similar to what it was during most of 2010 -- a year in which the Democrats lost 63 House seats and majority control in that chamber.

While the two parties rely on their ideological soul mates for support -- Republicans depend on conservatives, while Democrats lean on liberals -- both parties also need at least some support from the political center to win elections. Self-described moderates are more likely to have a favorable image of the Democratic Party (47%) than of the Republican Party (27%), which may prove problematic for the GOP next year in the congressional elections. It is worth noting, however, that moderates typically lean more Democratic than Republican. 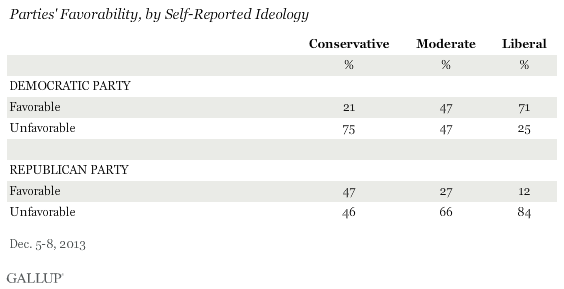 The Republican Party can hardly claim to have locked up its support among conservatives, who are as likely to have a favorable (47%) as an unfavorable (46%) image of the GOP. Liberals, by contrast, are more unified in their support for the Democratic Party, with 71% viewing the party favorably.

Neither party closes out the year with a positive public image, but Republicans have had a worse year in terms of overall favorability. The damage wrought by the federal government shutdown has not dissipated much for the GOP. In addition, the party, at least in terms of its favorability, has failed to benefit much from the healthcare law's woes, or the decline in the president's job approval rating.

Americans are divided over which party can keep the country prosperous, with 43% saying the GOP is better and 42% opting for the Democratic Party. Meanwhile, Republicans have reclaimed their advantage on national security matters.