PRINCETON, NJ -- To mark the solemn one-year anniversary of the Sandy Hook Elementary School mass shooting in Newtown, Conn., the victims' families have joined in asking Americans to honor their loved ones on Dec. 14 by engaging in deliberate acts of kindness. Americans are well-suited for the task, as 65% say they volunteered their time to a religious organization or some other charity in the past year, and 83% say they donated money. 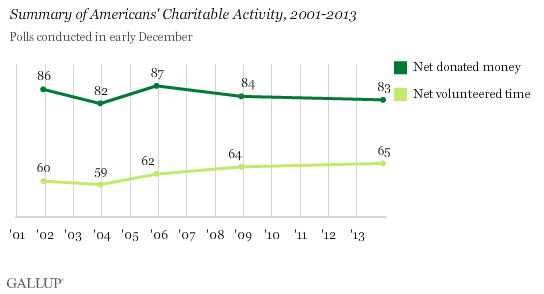 "'We are broken,' said Matt Crebbin, the coordinator of the Newtown Interfaith Clergy Association. He encouraged people in Newtown and elsewhere to perform acts of kindness as a way to allow something positive to emerge from the tragedy."

The latest results are based on Gallup's Lifestyle poll, conducted Dec. 5-8.

The percentage who have donated to a religious organization is the lowest Gallup has measured to date, with faith-based giving falling nine percentage points since 2005. Donations to other types of charities have been flat since 2005, suggesting the decline in religious donations may be due more to the weakening of Americans' bonds with formal religious institutions rather than to the economy. 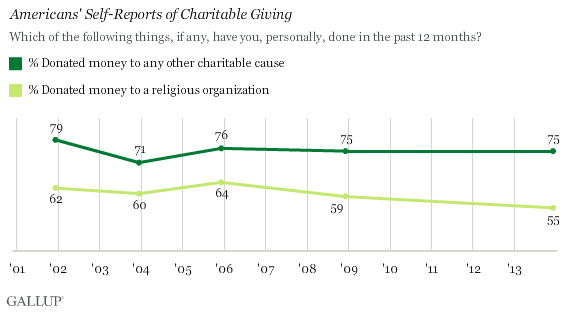 In terms of volunteering, 46% of Americans report having given their time to a religious organization and 49% to another type of charitable group. Sixty-five percent donated their time to at least one of these types, and 30% donated to both. 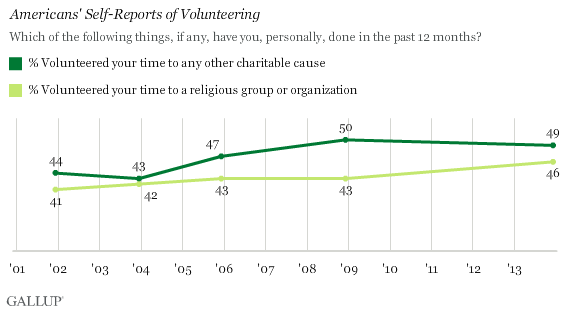 Naturally there are significant differences in self-reported charitable giving by household income, with 95% of those in households earning $75,000 or more saying they gave money to a religious organization or other charity in the past 12 months. This drops to 86% among middle-income earners and 67% among those earning less than $30,000. Upper-income Americans are also more likely to say they volunteered.

Furthermore, Christians are more likely than those with no religious affiliation to report that they made donations and volunteered time, and Protestants are at least slightly more likely than Catholics to report higher rates of donating and volunteering. Similarly, those who attend church or another religious institution regularly are much more likely to say they have donated and volunteered in the past year. These differences are driven largely by religious respondents (weekly churchgoers, Christians, and Protestants, specifically), who are more likely to say they donated money or time to a religious organization in the past year. At the same time, religious Americans are just as likely as nonreligious Americans to report nonreligious giving and volunteering. (See table on page 2 for detailed results by demographic and religious group.)

There is no difference in self-reported involvement with charitable activity or donations by gender. The only significant differences by age are the lower rate of donating money among young adults, and slightly lower rate of volunteerism among seniors. 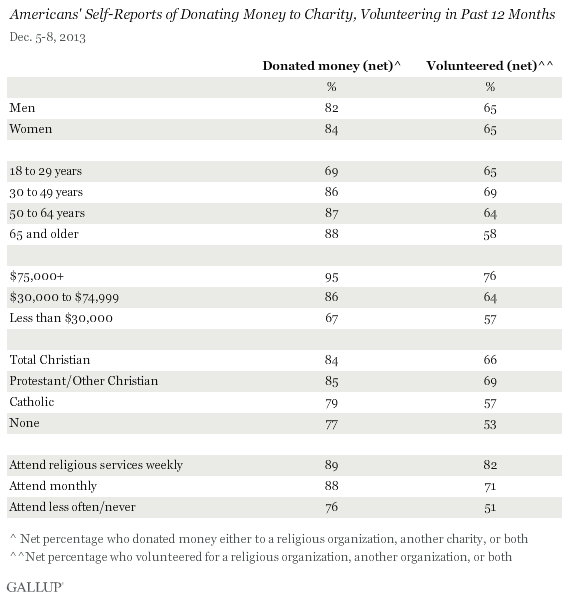 Many Americans will likely pause this weekend to think about and pray for the victims of Sandy Hook and their families. Others may be moved to do acts of kindness in honor of those who lost their lives. Gallup data reveal that the vast majority of Americans already practice kindness in the form of charitable giving and volunteering their time, both within and outside religious communities. Perhaps Americans will do more to seek out these opportunities this weekend in solidarity with the people of Newtown. 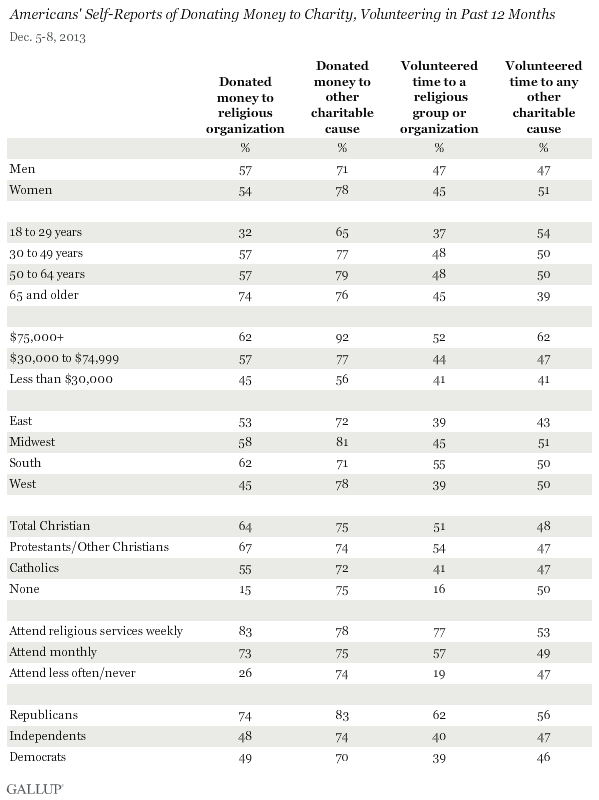