PRINCETON, NJ -- President Barack Obama wrapped up 2013 with an average 41% approval rating in December, unchanged from November. However, his monthly job approval declined steadily through most of 2013, including a three-percentage-point drop in March. 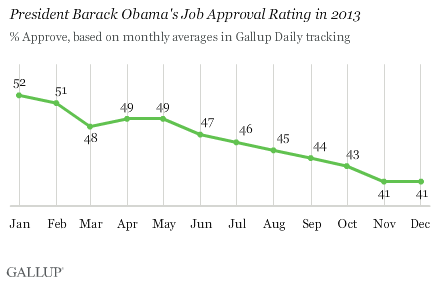 Gallup's three-day rolling averages of Obama's job approval rating are especially helpful in identifying the events that likely contributed to his overall decline in popularity.

Obama started the year with approval ratings generally where they left off in 2012 -- in the middle to upper 50s. These included consecutive days in early January at 56% -- his highest three-day rating of 2013.

Obama's approval rating fell to the high 40s for two days in mid-January, soon after he outlined new gun control policies formulated in response to the Newtown school shootings. Although the specific proposals were popular, Americans had a mixed reaction to his overall plan, with barely half wanting their members of Congress to support it.

His approval rating rebounded around the time he was sworn in for a second term, reaching 53% in the first three days after the Jan. 20 inauguration, and it remained at 50% or more through February. 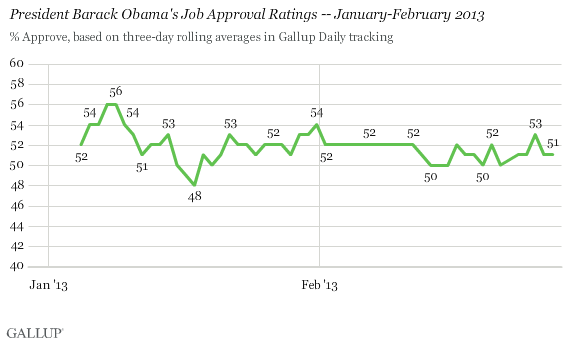 With March came the federal government's budget sequestration and an immediate downtick in Obama's approval rating to 46%, in the first three days of the sequester. His approval rating stayed below 50% for most of March, and ultimately averaged 48% for the month, down three points from February's 51%.

Obama's rating improved slightly to 49% and 50% in early April; it then jumped to between 51% and 53% in the days after the April 15 Boston Marathon bombing and subsequent Boston memorial for the victims, at which Obama spoke. Obama received an average 49% approval rating for all of April, up one point from March. 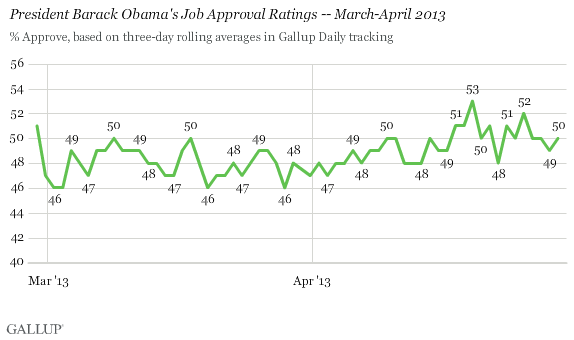 Obama's approval rating ranged from 48% to 51% for most of May. The May 3 Bureau of Labor Statistics jobs report, which showed a downtick in the nation's unemployment rate from 7.6% to 7.5%, may have helped him maintain a steady 49% average for the month.

June brought more challenges for Obama, with The Guardian, a British newspaper, issuing a series of reports starting on June 5 about the existence of secret NSA spy programs, including surveillance of American citizens. On June 9, The Guardian revealed the identity of its source, former NSA contractor Edward Snowden, and during the second week of June, Obama's approval rating dipped from 49% to 45% -- his lowest rating of the year to that point. His approval briefly surged to 50% on the first two days of his weeklong Africa trip in late June, but quickly reverted to 45% by month's end. His average approval rating for the month was 47%, down two points from May. 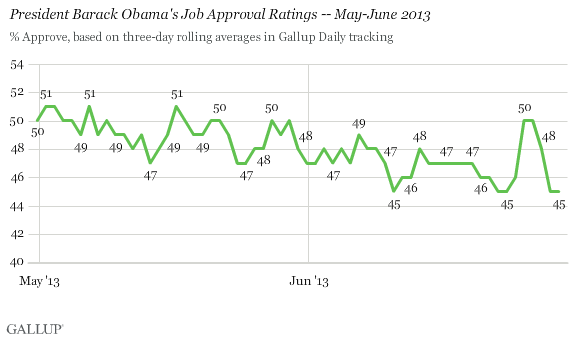 The Guardian continued to expose U.S. government spy programs through the summer, with the revelations sparking outcries against the Obama administration from certain members of Congress and world leaders. Meanwhile, Obama's approval rating sank a point per month, hitting 44% in September.

It is possible that other issues contributed to his declining approval. Obama's comments on the not-guilty verdict for George Zimmerman in the Trayvon Martin murder trial in mid-July received heavy media coverage. The budget conflict in Congress leading up to the October shutdown dominated political news in September. And Obama addressed the nation that month about the need to intervene in Syria to help prevent the use of chemical weapons on civilians. The government's U.S. unemployment rate improved slightly over the summer -- yet evidently, given the decline in Obama's approval rating, this good news was more than offset by other issues. 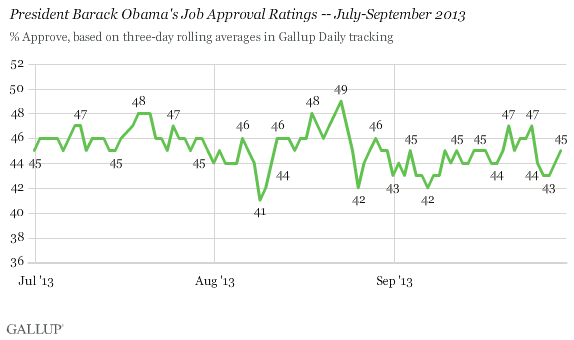 After weeks of failed efforts at a compromise budget bill in Congress, the federal government was forced into a partial shutdown on Oct. 1, and, similar to what happened in March with sequestration, Obama's approval rating immediately fell four points -- from 45% in the last three days of September to 41% in the first three days of October.

This period also spanned the Oct. 1 opening of federal health insurance exchange websites, which gave Americans access to a new health insurance marketplace under the new healthcare law. However, the website had major technical problems, and many Americans lost their health insurance because it didn't comply with the law. This prompted some to charge that Obama intentionally misled the public about their freedom to retain their own healthcare plans. Likely as a result, Obama's average approval rating fell further in late October and into November. Underscoring this, Obama brushed up against his own record-low approval rating of 38% (from 2011) with three 39% ratings in November and, as a result, it fell two points overall in November after a one-point drop in October.

December brought better news for the White House by comparison -- including significant, if not perfect, repairs to the federal health exchange website upon its relaunch after Thanksgiving, a positive jobs report on Dec. 6, and the stock market's string of record-high closings. Obama spoke at Nelson Mandela's memorial service in South Africa on Dec. 10, but otherwise made little news in December. For that, he received a reprieve from declining job approval, as his average rating held steady at 41% for the month. This was aided by a late-month increase in his approval to 44%. 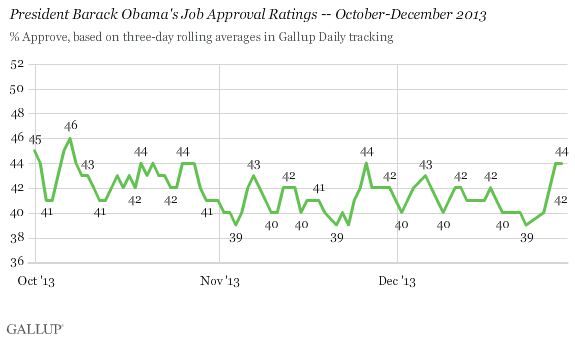 It has been less common to see sustained periods of significant decline during the normal course of a presidency, such as what Obama experienced this year, his fifth in office. The few examples of these from recent presidencies are:

Thus, recent polling history doesn't offer any firm conclusions about what a year of decline portends for a president; there is precedent for recovery, but also for stagnation.

Separately, Gallup trends show that two-term presidents typically receive less support in their second term than their first, what some have dubbed a "second-term curse." Even in the short term, it's unlikely Obama will get much of a boost out of his upcoming State of the Union address, given how little his past addresses have been associated with increases in approval.

Prior Gallup analysis shows that Obama's overall job approval rating is highly linked to his approval rating on the economy. This means that under normal circumstances, if his overall job rating is to increase, not only does the economy have to improve but Americans have to acknowledge it and give Obama credit for it. In 2013, despite BLS reports of reduced unemployment, a soaring stock market, and other positive economic signs, Americans maintained both a net-negative view of the economy and a negative view of Obama's handling of it. Clearly, they are looking for stronger economic growth before relinquishing their negative posture on the economy -- something Obama will need to focus on.

At the same time, Obama's 2013 decline did not chiefly stem from economic problems, but political ones: budget conflicts with Congress, revelations that his administration sanctions a national security program involving extensive covert monitoring of Americans' phone and computer data, and negative public reaction to the rollout of the Affordable Care Act. As long as these issues linger, particularly without major progress felt on the economy, Obama's job rating could continue to languish in 2014 and beyond.