WASHINGTON, D.C. -- The International Consumer Electronics Show (CES) this week allows technology developers to showcase the latest gadgets that may become must-haves for many Americans. As attendees get a glimpse of the industry's future, Gallup finds that the devices Americans own have changed over the past decade, with ownership of laptops (64%) and iPods/MP3 players (45%) up most dramatically from 2005. Meanwhile, far smaller proportions of Americans now own VCRs and basic cellphones, which were a staple to many in the past. 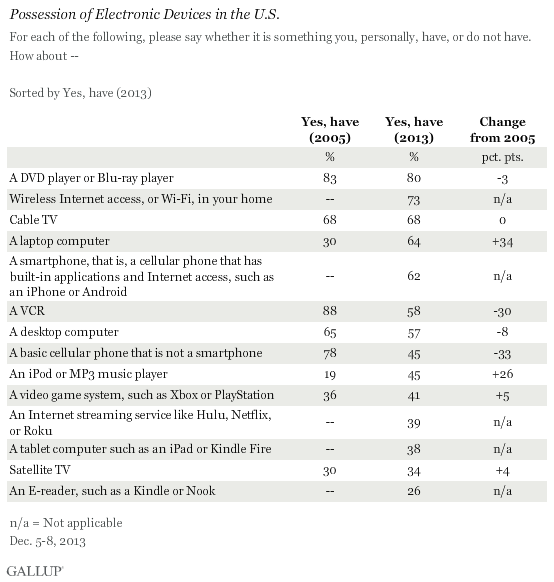 These results come from a Dec. 5-8 Gallup telephone survey of 1,031 national adults, with roughly half of the respondents reached on cellphones and half on landlines.

Technology and consumer electronics is a dynamic field; devices that are commonplace can quickly become obsolete as new products emerge. That Gallup did not ask about a number of electronic products and services in 2005 that were included in the current update is testimony to these changes.

Compared with 2005, fewer Americans today have desktop computers, VCRs, and basic cellphones, while there have been substantial increases in ownership of MP3 players and laptops, with slight increases in ownership of video game systems and satellite TV. Meanwhile, most Americans say they have Internet access at home through Wi-Fi (73%) or have smartphones with Web access (62%).

Still, even in the face of such rapid innovation, some items have showed remarkable staying power since 2005. Ownership of cable TV (68%) has not changed, even as speculation abounds that Internet streaming services such as Hulu, Netflix, or Roku could displace cable. Essentially the same share of Americans own DVD or Blu-ray players as in 2005, 80%, and this is the most commonly owned electronic device.

The youngest American adults -- those aged 18 to 29 -- favor a different portfolio of technology devices than their older compatriots do. Smartphone ownership among the young is nearly universal (88%), and it is the most common device among this group. Eighty-three percent of 18- to 29-year-olds have wireless Internet access at home, and another 79% have a laptop. 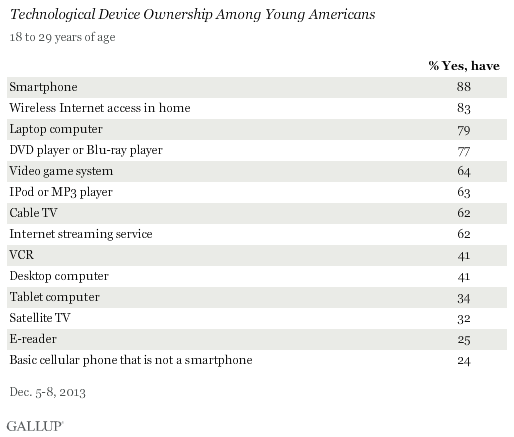 Less common among younger Americans are items that are familiar to individuals of a different generation -- about four in 10 younger Americans have a VCR (41%), and an identical percentage have a desktop computer. Meanwhile, a basic cellphone, which 86% of 18- to 29-year-olds owned in 2005, is now the least commonly owned technology device among this age group (24%).

This is not to say that older generations have been left behind as technology changes. Recent research suggests that the largest growth in Facebook over the past year came from the oldest cohort of Americans, aged 65 and older. But older Americans are most likely to have older forms of technology, including cable TV (74%) and the now essentially obsolete VCR (74%), although 70% own DVD players. A majority of Americans aged 65 and older own a basic cellphone (61%), while one-quarter own a smartphone.

About half of older Americans have wireless Internet access in their homes. Portable Internet-based or Internet-providing devices are less popular with American seniors: one-quarter have tablet computers, while 16% have an iPod or MP3 player and 15% have an Internet streaming service. Video game systems are the least popular electronic product among older Americans, at 10%. 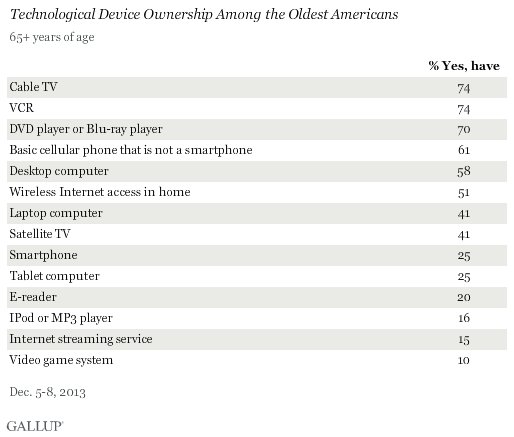 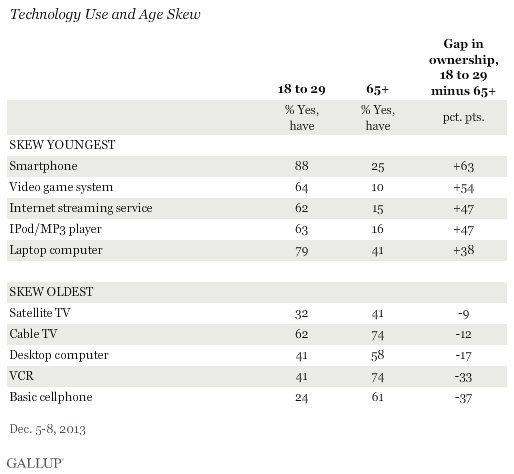 The week's CES show could unveil another electronic device that will soon be ubiquitous in American life. Of course, in the process, these new devices will begin displacing other popular technology. The constantly evolving nature of the technology scene is why so many people find it exciting, and as this Gallup poll shows, technology ownership has changed dramatically since 2005. Portable Internet-connected devices such as laptops and smartphones are generally more favored, while older forms of technology such as desktop computers, VCRs, and basic cellphones are falling out of fashion.

Home Internet Access Still Out of Reach for Many Worldwide

Worldwide, 32% of adults in 2011 reported having home Internet access, up from 29% in 2010 and 25% in 2009. Home Internet access remains nearly nonexistent in many countries and varies widely in key economies.

Many Americans under 30 admit they spend too much time using the Internet (59%), their cell phones (58%), and social media sites such as Facebook (48%). Among Americans overall, television is the top thief of time.