PRINCETON, NJ -- Nearly half of Americans say the Affordable Care Act will make the healthcare situation in the U.S. worse in the long run, while slightly more than one-third think it will make the situation better. These attitudes have changed little since late November. 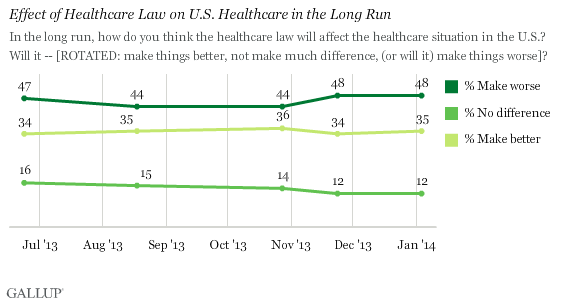 These results are from Gallup polling conducted Jan. 3-4, as the new year begins and as most provisions of the Affordable Care Act, or Obamacare, begin to take effect.

When asked more broadly if they approve or disapprove of the Affordable Care Act, Americans come down on the disapprove side by 54% to 38%. These results, too, are similar to attitudes in late November, although they are slightly more negative than attitudes in December. Americans have tended to disapprove rather than approve of the healthcare law throughout the past year. By contrast, in mid-November 2012, just after President Barack Obama was re-elected, Americans were more evenly divided, with 48% approving and 45% disapproving. 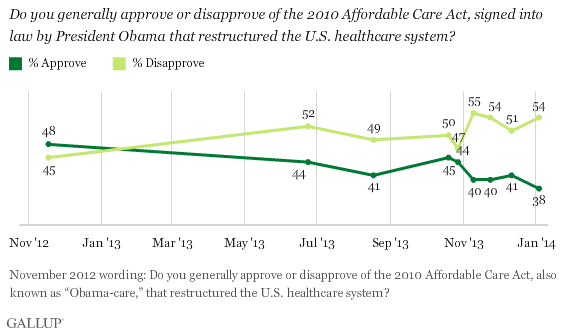 Although Americans generally view Obamacare negatively, most do not at this point believe the law has affected them personally, either positively or negatively.

Sixty-six percent of Americans say the law has not -- so far -- affected them or their families. The unaffected group is smaller by only a few percentage points than it was in two polls from last year. The relative few who say the law has affected them are more negative than positive about it, with 19% saying the law has hurt them and 10% saying it has helped them. 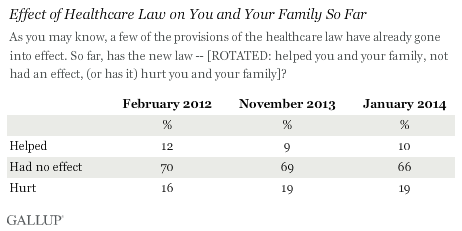 Although most Americans say the law has not affected them thus far, 37% anticipate it will make their family's healthcare situation worse in the long run, while 22% say it will make their situation better. These opinions have fluctuated somewhat over the past six months, but in all instances, the public has predicted a more negative than positive personal outcome. 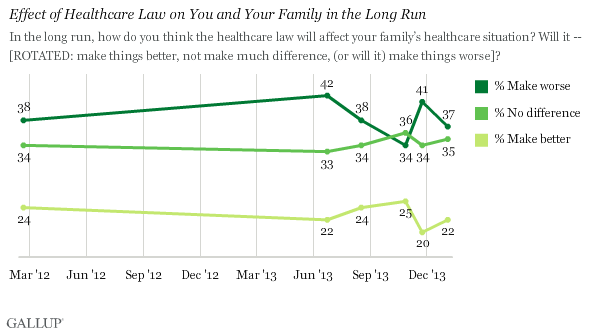 Although the ACA has generated a great deal of news attention in recent months, Americans appear no more familiar with it now than they were last summer. Sixty-nine percent currently say they are "very" or "somewhat familiar" with the law -- compared with 68% back in August. However, only one in five Americans claim to be very familiar with the law, which is perhaps understandable given its complexity.

Americans' attitudes toward the healthcare law are strongly related to their underlying partisan orientations. Put simply, Democrats are positive, Republicans are negative, and independents' views tilt more negative than positive.

This partisanship is evident even in questions asking about the law's effect on Americans' personal lives. Almost one-third of Republicans say the healthcare law has already hurt them and their family; 2% say it has helped them. It is not clear if the law has actually harmed this many Republicans so far, or if these perceptions simply reflect underlying negative predispositions toward it or perhaps mental anguish. By contrast, 18% of Democrats say the law has helped them; 5% say it has hurt them. Partisan reactions to the more general approve/disapprove question diverge even more -- 72% of Democrats approve of the ACA and 88% of Republicans disapprove.

All in all, the degree to which Americans have an opinion on the law -- positive or negative -- varies widely, depending on which aspect of the law is being measured. Most Americans have an overall opinion about the ACA when they are asked to comment on it in general terms, and most say it will have a positive or negative effect on the nation. Fewer expect the ACA to have any effect on them personally in the long run, and even fewer say it has affected them personally to date. Still, and perhaps most importantly, Americans remain more negative than positive about the ACA regardless of the focus.

Remarkably, there has been little fundamental change in most of these attitudes over the past year or two -- and especially in recent months, despite the highly contentious and visible introduction of the ACA's major features. Americans' views of the healthcare law seem to be fairly well established, and largely rooted in partisan politics.

Results for this Gallup poll are based on telephone interviews conducted Jan. 3-4, 2014, on the Gallup Daily tracking survey, with a random sample of 1,020 adults, aged 18 and older, living in all 50 U.S. states and the District of Columbia.

Americans see the 2010 Affordable Care Act as President Barack Obama's greatest achievement to date as well as his biggest failure, underscoring the controversial nature of the law that is likely to define his legacy.