WASHINGTON, D.C. -- Despite the announcement of historic reforms late last year that would shift China's economy to a more consumer-driven model, Americans still see China in the same, mostly unfavorable, way they did in early 2013. Forty-three percent of U.S. adults say they have a very or mostly favorable opinion of China, while 53% see it very or mostly unfavorably. 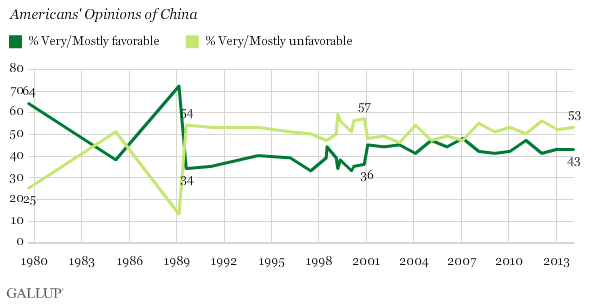 These results come from the Feb. 6-9 Gallup World Affairs poll.

Most analysts expect China to be the United States' foremost strategic and economic rival in the decades to come. That is a dramatic shift from 1979, the first year Gallup asked this question, when China's GDP was not even one-tenth of U.S. GDP. That year, 64% of Americans saw China favorably. Impressions fluctuated strongly between positive and negative until the televised crackdown on Tiananmen Square protests in June 1989. Americans' favorable ratings of China plummeted to 34% late that year -- the lowest to date at that time. Notably, since China joined the World Trade Organization in 2001 and trade with the U.S. expanded dramatically, China's favorable rating has fluctuated in a narrow range between 41% and 48%. 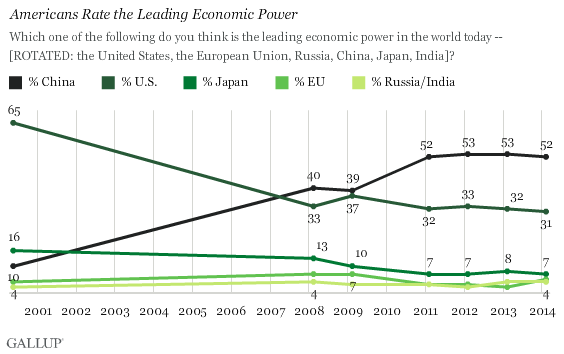 Attitudes on this question have not changed since 2011, but longer term, belief that China is the world's leading economic power has skyrocketed since 2000. Then, just one in 10 Americans named China as the superior economic power; now, a reliable majority do. This is likely attributable to China's impressive economic performance over the last 13 years -- its economy often growing by double digits over this time span -- and the United States' often underwhelming, crisis-ridden economy.

Though Gallup last year found that most Americans regard China as more friend than foe, many Americans regard China's military strength and economic power as a threat to the vital interests of the U.S. Americans are more likely to perceive China's economy (52%) than its military (46%) as a "critical" threat to U.S. vital interests over the next 10 years, suggesting that, for now, U.S. residents see China's growing influence through more of an economic lens.

Still, a plurality (46%) do see China's military -- which has the world's largest standing army, though its defense budget is less than one-fifth that of the U.S. -- as a critical threat, down slightly from 51% last year, but elevated from the 39% who held this view the first time Gallup asked this question, in 2004. Another 41% of Americans currently say China's military is "an important but not critical" threat to U.S. vital interests.

John F. Kennedy in a 1959 speech noted that, "When written in Chinese, the word 'crisis' is composed of two characters -- one represents danger and one represents opportunity." Americans clearly see the potential for danger in China, in its looming economic and military power.

At the same time, China may also represent an opportunity. Unfavorable opinions of China have softened from lows observed during Tiananmen Square and other tense moments in Sino-American relations. Most Americans, as has largely been the case since 2008, see China as the world's leading economic power, a tectonic image shift for a country once regarded as poor. And despite their generally unfavorable views of China, more Americans see China as a friend or an ally, rather than an enemy. How American public opinion shifts with regard to this rising Asian power will continue to measure which possibility -- opportunity or danger -- Americans believe is more the reality.

In U.S., 83% Say North Korean Nukes Are a Critical Threat

Eight in 10 Americans say the development of nuclear weapons by North Korea is a critical threat to the vital interests of the U.S., tied for first with Iranian nuclear weapons and international terrorism among nine potential threats.