WASHINGTON, D.C. -- Among the 50 largest U.S. metropolitan areas, Washington, D.C., remained the most confident in the U.S. economy in 2012-2013, but it now shares the top spot with San Jose, Calif. Both averaged a +4 score on Gallup's Economic Confidence Index over the past two years; they were among the three areas with net positive economic confidence on this measure. Jacksonville, Fla., had the lowest economic confidence (-25). 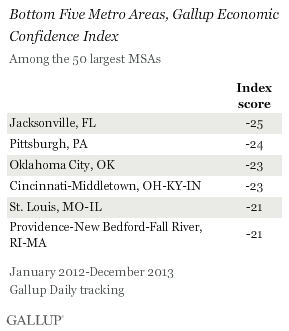 These results are based on Gallup Daily tracking conducted throughout 2012-2013 in the 50 most populous U.S. metropolitan statistical areas (MSAs). Gallup interviewed at least 12,000 adults in each of these MSAs, with the highest number of interviews, 15,443, conducted in the New York City metro area. Each MSA sample is weighted to match the demographic characteristics of that area. Results for all 50 MSAs can be found on page 2.

Gallup's Economic Confidence Index is a composite of Americans' ratings of current U.S. economic confidence conditions and their perceptions of the economy's direction. The index has a theoretical maximum of +100 (if all respondents rate the economy as "excellent" or "good" and say it is getting better), and a theoretical minimum of -100 (if all rate the economy as "poor" and say it is getting worse). Nationwide, the Gallup Economic Confidence Index averaged -16 in 2013.

Though economic confidence is still negative in most MSAs, most areas saw slight increases when factoring in the 2013 data. And fortunately for areas near the bottom such as Jacksonville and Pittsburgh, MSA confidence levels have shown some resilience. Buffalo, N.Y., for example, whose dismal confidence readings put it at the bottom in 2011, has climbed to the relatively average reading of -18 for 2012-2013.

Results are based on telephone interviews conducted as a part of Gallup Daily tracking Jan. 1, 2012-Dec. 3, 2013, with a random sample of 164,754 adults, aged 18 and older, living in the 50 largest metropolitan statistical areas (MSAs) by population.

Americans' satisfaction with the country's direction edged up to 25% in March, the highest level since last July. Still, nearly three in four Americans are dissatisfied with how things are going in the U.S.

Gallup's Economic Confidence Index reading of -16 for February marked the end of a three-month recovery since the federal government shutdown in October that drove confidence down to -35.