skip to main content
Economy
U.S. Hispanics Positive About Their Standard of Living 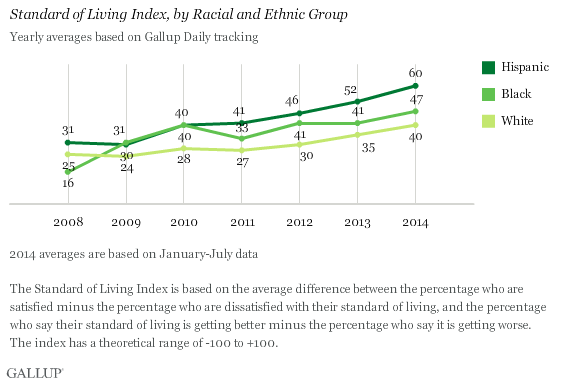 These results are based on yearly averages of Gallup Daily tracking interviews from January 2008 through July 2014. The 2014 data include interviews with more than 1,800 interviews each with blacks and Hispanics.

All major U.S. racial and ethnic groups are generally positive about their standard of living. The index score among all Americans in 2014 to date is +44, which includes record monthly highs of +47 in May and July.

By comparison, the index score among all Americans was +24 in the recessionary year of 2008, including +31 among Hispanics, +25 among whites, and +16 among blacks. Blacks' perceptions of their standard of living greatly improved in 2009, coincident with Barack Obama's taking office as president, while whites' and Hispanics' ratings were generally stable.

Standard-of-living ratings rose among all three groups in 2010, before stalling in 2011, but the scores began to rise again in 2012 as the economy improved.

Currently, 82% of Hispanics say they are satisfied with their standard of living, compared with 79% of whites and 70% of blacks.

Meanwhile, 74% of Hispanics say their standard of living is getting better, slightly higher than the 72% of blacks who say this and significantly better than the 52% among whites.

All three groups' 2014 ratings on both standard-of-living items represent highs in Gallup's trend of more than six years. The full trends for each racial and ethnic group are shown on page 2.

Hispanics are more positive about their standard of living than whites or blacks, although that appears to be more of a perceptual difference rather than one grounded in reality. Whites report much higher annual household incomes on average than Hispanics or blacks. And Hispanics' unemployment rate is nearly twice that of whites.

Indeed, Hispanics whose annual household incomes are $36,000 or less are much more likely to be positive about their standard of living than whites or blacks at the same income level.

Although Hispanics are currently more upbeat about their standard of living than whites or blacks, this may be related more to the demographics of each group as well as their immigrant status. Thus, the differences in standard-of-living ratings by race and ethnic group may be something specific to the current generation of Hispanics living in the U.S. Those differences may not hold as U.S. Hispanics as a group get older, or as future generations of U.S. Hispanics become further removed from the original U.S. immigrants in their family tree.

Results for this Gallup poll are based on telephone interviews conducted January-July 2014, on the Gallup Daily tracking survey, with a random sample of 20,616 adults, aged 18 and older, living in all 50 U.S. states and the District of Columbia.

For results based on the total sample of 15,491 non-Hispanic whites, the margin of sampling error is ±1 percentage point at the 95% confidence level.

For results based on the total sample of 1,836 non-Hispanic blacks, the margin of sampling error is ±3 percentage points at the 95% confidence level.

For results based on the total sample of 1,835 Hispanics, the margin of sampling error is ±3 percentage points at the 95% confidence level. In U.S., Standard of Living Index Climbs to Six-Year High

Gallup's U.S. Standard of Living Index reached 47 in May, the highest monthly average in the more than six-year trend. The index is up three points from April.