PRINCETON, NJ -- Hispanics' approval of the job being done by President Barack Obama has settled in at about 10 percentage points above the national average, well below the Hispanic advantage of over 20 points that the president enjoyed in late 2012 and 2013. Obama's approval rating among Hispanics has averaged 13 points above the national average since he first took office in 2009. The size of Obama's approval advantage among Hispanics has varied significantly over the course of his administration, from as low as six points in some months in 2011 to more than 20 points in late 2012 and early 2013. In December 2012, just after the election, 75% of Hispanics approved, compared with 53% among all Americans. By August of this year, Obama's Hispanic approval gap dwindled to 10 points -- 52% among Hispanics versus 42% among the overall population.

Still, even with the recent drop, Obama's support remains higher among Hispanics than among the national population, and is proportionately higher now than it has been at other points such as in 2010, 2011, and early 2012. Hispanics were clearly most positive about Obama on a relative basis in the months leading up to his successful bid for reelection in late 2012 and into the first months of 2013. In some of these months, Hispanic approval ratings were in the mid-70s, compared with ratings in the low 50s among the national population. This surge in Hispanic approval in and around the 2012 election likely reflects the Obama reelection campaign's attention to Hispanics and its focus on increasing Hispanic turnout in key battleground states. During his campaign, for example, Obama said he was confident that he would get immigration reform done over the next year. Immigration reform has not yet come to pass, suggesting that the disproportionate drop in Obama approval among Hispanics since the election reflects at least in part the failure of the president -- and Congress -- to enact these promised legislative changes.

This hypothesis is reinforced by data showing that Hispanics are much more likely than U.S. adults overall to say immigration is the most important problem facing the country. Moreover, previous Gallup research also shows that variation in Hispanics' approval of Obama is tied to significant events in the immigration debate.

President Obama has lost significantly more support among Hispanics than among the national population since the months following his reelection in November 2012, although Hispanics' ratings of Obama remain 10 points above the national average. The significant uptick in Hispanics' approval at the time of the 2012 election, and the subsequent significant drop, may reflect unfulfilled promises that Obama made during the campaign about immigration reform.

Results for this Gallup poll are based on telephone interviews conducted from January 2009 through August 2014 on the Gallup Daily tracking survey, with random monthly samples of approximately 15,000 adults and 1,300 Hispanics, aged 18 and older, living in all 50 U.S. states and the District of Columbia. 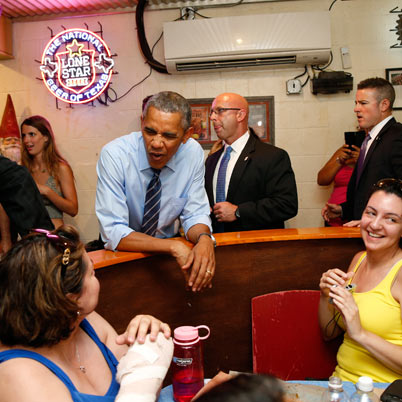 The Trend Line: Hispanic Approval of Obama Down in His Second Term