PRINCETON, N.J. -- Americans in all age groups have grown more partial to Israel in the Israeli-Palestinian conflict over the past 15 years, but adults aged 50 and older have grown particularly likely to sympathize with the Jewish state. The rise in Americans' sympathy for Israel over the past decade and a half stands in contrast to opinion in the decade before it. Prior to 2000, sympathy for Israel waxed and waned among all age groups, with the peak in 1991 reflecting public support for Israel during the Persian Gulf War. The declining preference for Israel through the mid-1990s mostly reflects the larger percentage of Americans favoring neither side at that time -- a period marked by significant diplomatic efforts to end the Israel-Palestinian conflict, as well as the first Palestinian elections.

From 2002 to 2004, younger adults -- those aged 18 to 29 -- were slightly less likely than middle-aged and older adults to favor Israel, but since 2005, their views and those of Americans aged 30 to 49 have been virtually identical. At the same time, adults aged 50 and older have become more likely to favor Israel -- with their support rising about 10 percentage points since 2007.

As sympathy for Israel sharply increased nationally between 1997 and 2003, the percentage siding more with the Palestinians rose a bit among 18- to 29-year-olds, while it was fairly flat among older age groups. It has since fluctuated among young and middle-aged adults, in part because of the smaller sample sizes of these groups. Older Americans of All Parties Have Warmed to Israel 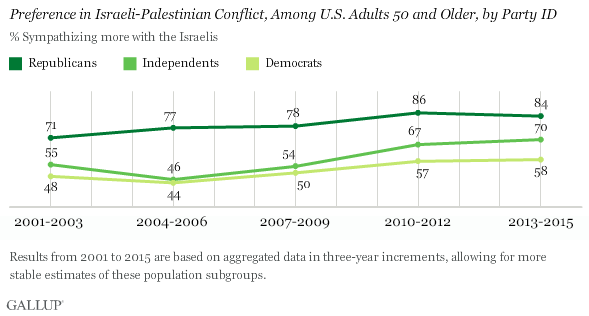 Meanwhile, among 18- to 49-year-olds, support since 2001 has increased among Republicans and independents, but has been flat among Democrats. Americans have become somewhat more likely to sympathize with Israel than with the Palestinians in the past 15 years. This is seen across all party as well as age groups. Older Americans have grown especially sympathetic toward Israel, and this shift has happened across the board politically -- not solely because of shifts among older Republicans. Meanwhile, independents and Republicans aged 18 to 49 are also leaning more pro-Israel, leaving younger Democrats as the only group whose views have not changed.

Gallup polling last summer found young Americans far less supportive than older adults of Israel's actions in the 50-day conflict that erupted in Gaza. The majority of 18- to 29-year-olds thought Israel's actions were unjustified, while the majority of those 50 and older called them justified. Nevertheless, some six months later, young Americans' broad sympathies toward the Israelis vs. the Palestinians are the same as a year ago. Whether this reflects that the Gaza conflict has faded in people's memories, the emergence of the Islamic State group as a global concern causing Americans to identify more with Israel, or something else is unclear. Regardless, the trends show support for Israel to be fairly high among all age groups, and no major generational retreat in support of Israel underway.