WASHINGTON, D.C. -- The 2016 presidential candidates who are the most familiar to U.S. adults -- Donald Trump, Hillary Clinton and Jeb Bush -- also rank among the least-liked, in terms of their unfavorable rating exceeding their favorable rating. Trump vies with Clinton as the race's best-known candidate, but he is by far the least-liked of the field, with 59% viewing him unfavorably and 32% favorably, yielding a net favorable score of -27. These ratings are based on Gallup's latest two-week rolling average, from Nov. 23-Dec. 7, 2015, largely before Trump made controversial remarks about Muslims entering the U.S. on Monday.

Bush rounds out the three most well-recognized presidential candidates, with 78% of Americans having an opinion of him. Like Trump, Bush's image is deeply underwater, as his unfavorable rating exceeds his favorable rating by 14 percentage points. By comparison, Clinton's image problem is more subdued, with a net favorable of -4. But her net-negative favorable score represents a significant slide from her score of +11 in March, when she was not only the best-known but best-liked candidate. But over the past several months -- in particular after four Republican presidential debates and two Democratic debates -- Americans' familiarity with many candidates has grown considerably. Carson has seen the largest gain in the percentage of Americans able to rate him, from 36% in the initial reading to 66% today. That 30-percentage-point gain compares with a 22-point increase for Sanders. Fiorina has registered a 19-point gain, while Kasich and Rubio have seen more modest gains over the campaign, at 14 points and 9 points, respectively.

Despite their gains in familiarity, Fiorina (49%) and Kasich (43%) are known to less than half of the population -- the only two candidates Gallup tracks to not meet that threshold.

Christie Has Largest Gain in Popularity

Other candidates -- namely Clinton, Fiorina, Rubio and Carson -- experienced significant improvements in their net favorable score at points over the summer and fall, but have since fallen back to where they stood in July. Only four candidates have a net favorable score in positive territory -- Carson, Rubio, Fiorina and Sanders. Several GOP candidates, as well as Democratic contender Bernie Sanders, have become more familiar to Americans over the past five months. But no candidate has significantly bolstered his or her image.

On the Republican side, Carson, Rubio and Fiorina can at least boast of slightly positive net-favorable scores, but this relative popularity must be considered along with their lower name recognition. Cruz and Christie, meanwhile, have slightly negative favorability scores. Trump and Bush, who began the campaign as well-known figures, have not seemed to benefit from their familiarity. Bush has seen his popularity deteriorate since July, while Trump, despite his ability to dominate media coverage, has seen no improvement in his public image, which was already in poor shape in July.

On the Democratic side, Sanders enjoys slightly better bragging rights over his rival Clinton on national favorability, but again his lower name recognition raises the question of whether he can maintain his modest likability if he were to become better known. Clinton, on the other hand, saw her popularity tumble as she re-entered the public arena earlier this year, after enjoying a period of widespread public acclaim during her stint as secretary of state and in the year after her tenure as chief diplomat. But, more recently, even as she has faced high levels of scrutiny for email practices when she was in the president's Cabinet and congressional inquiries into her response to the Benghazi attacks in 2012, Clinton's favorable ratings have remained mostly steady, if slightly negative.

This presidential cycle is replete with well-known candidates, but none are extremely well-liked by the public. There are some candidates who enjoy modest levels of popularity among U.S. adults, but they also tend to be the lesser-known candidates.

Results for this Gallup poll are based on telephone interviews conducted Nov. 23-Dec. 7, 2015, on the Gallup U.S. Daily survey, with a random sample of 6,603 adults, aged 18 and older, living in all 50 U.S. states and the District of Columbia. Each candidate was rated by a random subset of respondents during this period with sample sizes for each candidate ranging approximately from 1,800 to 1,950 respondents. For results based on the total sample of national adults rating each candidate, the margin of sampling error is ±2 percentage points at the 95% confidence level. All reported margins of sampling error include computed design effects for weighting. 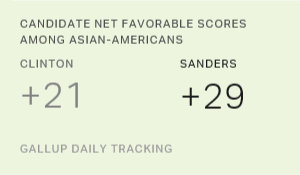 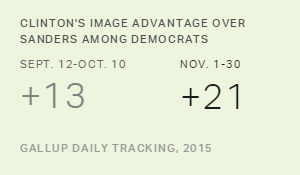 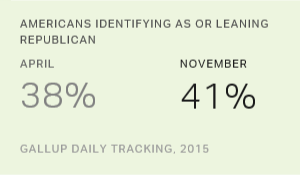