PRINCETON, N.J. -- Americans' approval of Congress averaged 16% in 2015, just slightly better than the 14% average recorded in 2013, the lowest in Gallup's four-decade trend. This marks the sixth consecutive year, and the seventh in the last eight years, in which fewer than 20% of Americans approved of Congress. In Gallup's most recent measurement, from a Dec. 2-6 poll, 13% of Americans approve of the job Congress is doing.

Congress historically has not had high approval ratings, with the average across all measurements since 1974 at just 32%. Congress' average job approval rating has exceeded 50% just twice since 1974, in 2001 and 2002 following the rally in support for government leaders after the Sept. 11 terrorist attacks.

There have been other times, like now, when Congress' approval rating has averaged below 20%, including in 1979 and 1992 during recessionary economic times. But unlike the current era, those prior sub-20% readings did not persist.

The more negative evaluations of Congress in recent years partly reflect the economic struggles the nation has faced during that time. But even as Americans' confidence in the economy has improved since the 2007-2009 recession, their ratings of Congress have stayed low.

Americans' largely negative reviews of Congress, thus, are driven by more than just the health of the economy. The public appears to be frustrated with the federal government's seeming inability to address the problems facing the country, with attempts to address issues such as immigration or the economy ending in a partisan stalemate. In recent years, when Gallup has asked Americans to name the most important problem facing the country, dissatisfaction with the government has consistently ranked among the top issues. In 2015, it received more mentions, on average, than any other issue, edging out the economy.

Americans who identify politically as Republican were slightly more approving of Congress earlier in the year, as their party enjoyed majority control of both houses of Congress for the first time since 2007.

But that greater power did not lead to passing Republican-favored legislation. Republicans may be blaming their leaders for this, as both Senate Majority Leader Mitch McConnell and former Speaker of the House John Boehner had higher unfavorable than favorable ratings from their own party's supporters, something highly unusual in ratings of any political figure.

Republicans' frustration is evident in that they have been at least somewhat less likely than Democrats to approve of the job Congress is doing each month since June.

The net result of these party trends is that average approval ratings of Congress this past year were equally poor among the major party groups -- 17% of Democrats, 15% of independents and 15% of Republicans.

The lack of a party difference in ratings of Congress is inconsistent with the historical norm when one party has had control of both the House and Senate. Gallup data going back to 1993 typically show the majority party's supporters give Congress much higher ratings than supporters of the minority party. This lack of strong support from either party is contributing to the lower overall approval rating. Prior to this year, in the four periods when one party had majority control of both houses of Congress, the Republican-Democratic gap in ratings of Congress has ranged from a low of 10 percentage points in 1993-1994 to 30 points from 2003-2006. The average party gap in those four periods is 18 points.

Americans' views of Congress in 2015 were little changed despite their slightly more positive economic outlook and the change in party control of the Senate. For a brief period early in the year, the GOP's control of both houses helped Republicans be more positive about Congress. But that did not last, and by year's end, Republicans were less positive about Congress than were Democrats, despite the GOP's hold on the institution.

In the past, partisans may have been happy just to have their party in control of Congress, but now it appears Republicans take little solace in their party's majority status if it does not produce results in the form of passing legislation they favor. Republicans' poor ratings of Congress are a major reason for the institution's lower overall approval rating.

Former Speaker Boehner was the target of much of the party's frustration, leading to his resignation this fall. Now new Speaker of the House Paul Ryan will attempt to move the GOP agenda forward. Unlike Boehner and Senate Majority Leader McConnell, Republicans view Ryan positively overall. How long that positive view will last remains to be seen, especially considering that the Republicans' chances for seeing their favored legislation become law remain very slim as long as a Democratic president is in office. 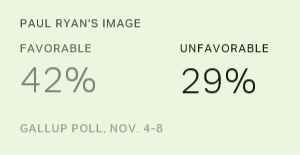 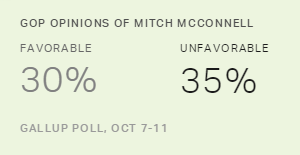