WASHINGTON, D.C. -- Ahead of the 2016 presidential primaries, 63% of U.S. adults say they have given "quite a lot" of thought to the presidential contest -- higher than the percentages who thought a lot about the election before the primaries began in 1992, 2000 and 2004. At a similar point in 2008, 64% had given the campaign a lot of thought, but that was after voting had already occurred in three states, including Iowa and New Hampshire.

The amount of thought given to an election is an important indicator of voter engagement and often relates to voter turnout in national elections. A separate Gallup measure, reported previously, found that 69% of Americans are following news about the election very or somewhat closely, similar to the current "thought" finding.

Republicans, Conservatives and Older Americans Are More Engaged in Election

Though engagement with the presidential election is generally high -- as the "thought" question shows -- some groups seem especially energized about the coming election. Seventy-four percent of adults aged 65 or older and 73% of those aged 50 to 64 say they have given quite a lot of thought to the election. By contrast, younger Americans are more likely to be tuning it out: 43% of 18- to 29-year-olds say they have given serious thought to the election.

At this early point in the election process, Republicans and those who lean toward the Republican Party (70%) are modestly more likely than Democrats and Democratic leaners (63%) to be politically engaged. Likewise, conservatives are more engaged than moderates or liberals in the election: 68% of conservatives have given a lot of thought to the election, compared with 61% of liberals and 60% of moderates.

About seven in 10 white Americans have given a heavy amount of thought to the election, compared with 49% of nonwhites. This differs from the 2008 election, when there was little difference between these groups on this question, reflecting the rise of Barack Obama and the possibility of his becoming the first black president.

About Half of Adults Enthusiastic About Voting in Election

Republicans have a modest advantage over Democrats on this metric, as they typically do. A majority of Republicans and Republican leaners (54%) are extremely or very enthusiastic about voting, compared with 49% of Democrats and Democratic leaners.

Many Americans are giving the 2016 presidential election considerable thought, an early indicator that this election could see high voter turnout. Electoral engagement is higher this year than at similar points in the 1992, 2000 and 2004 campaigns, and on par with engagement in 2008 after primary voting had already begun.

Generally, Republicans and the key segments that make up the Republican base, such as conservatives and older Americans, are at least slightly more engaged in the election than Democrats and groups that tend to lean Democratic. One challenge for the person who claims the Democratic nomination is to find ways to increase interest and excitement within the Democratic base. 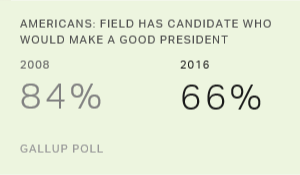