WASHINGTON, D.C. -- Syria's negative image in the U.S. increased over the past year to the point that four in five Americans now say they have an unfavorable view of the country, up from 74% a year ago. Syria now has the second-worst image of 21 countries rated in a new Gallup poll, with only North Korea rated worse. Over the 25 years Gallup has asked Americans about Syria, the country's image has never been very positive. No more than 25% have ever viewed the nation favorably, and that has now dwindled to 12%. The percentage viewing it unfavorably has almost doubled since 2000 -- first jumping to 60% in 2005 as U.S.-Syrian tensions were escalating over Syria's role in supporting regional terrorism. Its negative rating crossed the 70% threshold in 2012 as a popular uprising in Syria was mounting, and it has since remained high through the five-year civil war. Meanwhile, the percentage with no opinion of Syria has declined from 36% in 2000 to 8% today.

The current data, from Gallup's Feb. 3-7 World Affairs poll, comes as a ceasefire in the Syrian civil war appears less and less likely to occur. Although several world powers convened last week to agree on a "cessation of hostilities" and the delivery of aid to Syria, the country's president has expressed doubt such a truce is feasible.

As they watch the unfolding news from Damascus, Americans of all political stripes view Syria negatively, but Republicans have the worst views. Nine in 10 Republicans have an unfavorable view of the country, compared with about three in four independents and Democrats, respectively. Gallup has also found that a majority (58%) of Americans view the conflict in Syria as a critical threat to the vital interests of the U.S.

Independents and Democrats are fairly split over whether the U.S. military should maintain, step up or scale back its involvement. But Republicans lean heavily toward increasing it (49%). Syrian President Bashar al-Assad has used chemical weapons against his own people, maintains close ties with Russian President Vladimir Putin and keeps his grip on a country that has rebelled against him for several years. Now with conflict creating an international refugee crisis, it's not surprising that Americans' views of the country are at a low ebb.

At the same time, the American public -- perhaps reflecting the lack of consensus seen among the 2016 presidential candidates on the issue -- is divided over how deeply the U.S. military should be involved. Republican candidates have repeatedly focused on the need for more extensive U.S. efforts in the region. Rank-and-file Republicans across the country are much more likely to favor more involvement than independents or Democrats, but there is hardly any agreement on the matter. Half of Republicans say that current involvement is about right or that the U.S. should be less involved. 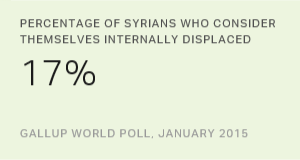 One in Six Syrians Consider Themselves Internally Displaced

Seventeen percent of Syrian adults consider themselves internally displaced within the country. These Syrians are more likely to have experienced an injury or death in their household because of the conflict. 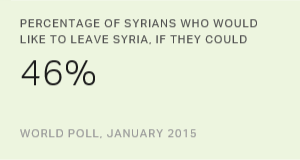