PRINCETON, N.J. -- Hillary Clinton and Bernie Sanders have multifaceted images among the American public. But the most common responses Americans give when asked to say what comes to mind when they think of each are "dishonest" and "dislike her" for Clinton, and "socialist" and "old" for Sanders. On the positive side, a fair number of Americans view Clinton as capable and experienced, and Sanders as a fresh face and honest. These findings are from a Feb. 13-14 survey. Separately, Gallup Daily tracking of the presidential candidates' favorable ratings shows that only 10% of Americans do not know enough about Clinton to say whether they have a favorable or unfavorable opinion of her, and 20% have no opinion of Sanders. In line with that, 12% of Americans could not articulate a top-of-mind impression of Clinton in the latest poll, while nearly one in five could not think of anything to say about Sanders.

These top-of-mind impressions clearly show that negative perceptions about Clinton's character and trustworthiness continue to dog her.

In addition to the 21% of responses in the "dishonest/don't trust her" category, another 7% of Americans use even stronger words in a similar negative vein, including "criminal," "crooked" and "thief." Nine percent say they dislike her. Smaller percentages (shown at the end of this article) associate her with Bill Clinton, with the controversy surrounding her use of a private email server while secretary of state and with the Benghazi terrorist attack.

The perceptions of Hillary Clinton as dishonest are not new. When Gallup asked the same question in 2008, "dishonest" was Americans' most frequent response. And, in a Gallup poll conducted in September 2015, Americans overwhelmingly referred to the email scandal when asked to mention what they had read or heard about Clinton.

On the positive side, 8% of Americans say they like her, 7% describe her as capable and qualified, 5% as experienced, 3% as strong and 3% as a good politician. Smaller percentages consider her honest or smart.

Overall, 29% of Americans offer a positive observation about Clinton while 51% express something negative. The rest have either a neutral comment or no opinion. This loosely fits with her overall image among national adults as measured on Gallup tracking, which is 42% favorable and 51% unfavorable.

Sanders' National Image Is More Mixed; Many Cite His Ideology

Sanders is a self-avowed democratic socialist and, accordingly, 12% of Americans think first of the word "socialist" when they hear his name; another 3% say "communist." Six percent of top-of-mind reactions to Sanders center on his age (he is 74 and would be 75 when inaugurated).

Clear-cut negative impressions of Sanders include people saying they view him unfavorably; describing him as "crazy" or "delusional"; and claiming that he would provide government freebies or simply give money away.

On the positive side, in addition to views that Sanders is a fresh face and honest, Americans mention that he cares about people and the middle class, that he is personable and that he is intelligent.

The public's comments about Sanders can be summarized as 26% positive and 20% negative, with the rest categorized as neutral, other or no opinion. The neutral grouping includes a significant number of references to "socialist," "liberal," "higher taxes" and his being older -- which, as noted, can be construed as either positive or negative, depending on the respondents' perspectives. Most of the references to Sanders' being a "socialist" come from Republicans, and Americans rated "a socialist" as the least appealing type of presidential candidate in a recent Gallup poll. But because some Democrats also call him a socialist, the response was categorized as neutral.

Democrats' Impressions Are More Positive, but Touch on Same Themes

In this primary and caucus stage of the presidential campaign, the constituency that matters for these two candidates is Democrats. Clinton has a broadly favorable image among Democrats and Democratic leaners in Gallup tracking, and Democrats' most frequently mentioned responses when asked what comes to mind when they think of her are positive, as would be expected. These include the broad positives ("I like her"), that she is capable of being president and that she is experienced. These are followed by views of her as dishonest, with positive responses below those.

Just 4% of Democrats mention "socialist" when they talk about Sanders, significantly less than is the case among the national adult population. Democrats are most likely, perhaps paradoxically, to talk about Sanders' age and to say he would bring fresh, new ideas to the presidency. Other comments Democrats make about Sanders are general positives: that he cares about middle-class people, that he is honest and that he is strong in his views.

Altogether, 38% of Democrats' comments about Sanders can be described as clearly positive and 12% as clearly negative, with 28% classified as neutral.

Although many Americans cannot articulate much that is of substance when asked about Sanders, the most frequent comments about him revolve around his unique ideological branding as a democratic socialist and his advanced age. By contrast, the comments about Clinton are more personal in nature, including a large number of mentions of her lack of honesty and character, along with positive associations as a competent and well-qualified public servant.

Unfortunately for Clinton, the negative associations currently outnumber the positive ones by a sizable margin, and even among Democrats, the negatives are fairly high. Throughout her more-than two-decades-long career in the public eye as first lady, U.S. senator, secretary of state, two-time presidential candidate and bestselling author, she has acquired a fairly well-developed image among Americans -- for better and for worse. 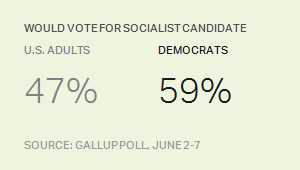