PRINCETON, N.J. -- Republicans who want to see Donald Trump win their party's nomination are most likely to say it is Trump's status as a nonpolitician and an outsider that drives their support, followed by his experience as a businessman. A number of Trump supporters also prefer him because he is outspoken. These findings are based on Gallup's Feb. 26-28 poll in which Republicans and Republican-leaning independents were asked whether they would prefer to see Trump, Ted Cruz or Marco Rubio win their party's nomination, and then to indicate in their own words what lies behind their preference. Responses to the latter question were coded into major categories as displayed in the accompanying table.

According to Trump supporters, his unconventional résumé and style have helped attract their support for his candidacy, more so than his positions on issues or specific policies. In fact, other than his signature issue of immigration, mentioned by 8% of his supporters, no other issue is named by more than half that many -- with between 2% and 4% mentioning his ability to deal with terrorists, his financial planning and budget expertise, and his handling of the economy and employment.

This is not to say Trump supporters don't think he has strengths on specific issues. In the same poll, Trump gets substantially more credit than his major competitors for being able to handle the economy and the deficit, as well as immigration. But it is his nonpolitician background that comes to mind first, not his positions on issues, when supporters are asked to explain why they want him as their party's nominee.

In addition to the perception that Trump is an outsider and a businessman, Republicans who support Trump also frequently mention that he would accomplish what he sets out to do, that his campaign has so far been self-funded, that he is honest and that his election as president would improve the stature of the U.S. around the world.

Cruz's Conservatism Is an Attraction, While Rubio Is Liked, Seen as Honest

Fewer Republicans in this survey say they would prefer Rubio as their party's nominee. Those who do generally offer less specific -- and certainly less unique -- reasons for supporting him than is seen for Trump. Their most-frequently mentioned reasons include generic justifications that he is the best candidate or at least better than the others, that he is honest, and that they like him and his decisions.

Cruz has the fewest supporters of the three Republican candidates in this survey, but those who do want him to be the GOP nominee provide only somewhat more specific reasons than is true for Rubio. In addition to the generic "I like him" justification, Cruz's supporters mention that he would stand up for constitutional rights, one of the Texas senator's central campaign themes, and that he would govern as a true conservative.

If Trump wins the Republican nomination, his opponent in the general election -- who right now is most probably Hillary Clinton -- will likely seek to attack him for his idiosyncratic temperament and bombastic ways. Previewing this possible line of attack, a member of his own party, 2012 Republican presidential nominee Mitt Romney, heavily criticized Trump on Thursday in a speech in Utah, using words like "bullying … showing off … absurd third-grade theatrics … ridiculous."

The insight from the new poll -- conducted before Trump engaged in additional nonconventional references and personal attacks in the March 3 GOP debate -- is that rank-and-file Republicans may be willing to look beyond these qualities and, by extension, that general-election swing voters could do the same. Republicans who support Trump's candidacy like him for being an anti-politician, and Trump's willingness to say things that flout conventional norms governing political speech may only strengthen his authenticity as an outsider.

More generally, the responses given by Republicans who want to see Trump prevail show that Trump's outsider message is clearly reaching its target through the free media on which he relies. His supporters' discussion of his outsider status, his business background, that he says what he thinks, his position on immigration, that he would get things done, and his being self-funded are all centerpieces of Trump's debate and numerous off-the-cuff comments.

Results for this Gallup poll are based on telephone interviews conducted Feb. 26-28, 2016, on the Gallup U.S. Daily survey, with a random sample of 681 Republicans and independents who lean Republican, including 277 who prefer Trump as the Republican nominee, 174 who prefer Rubio and 124 who prefer Cruz, aged 18 and older, living in all 50 U.S. states and the District of Columbia. For results based on each candidate's supporters, and based on results near 20%, the margin of sampling error is no more than ±7 percentage points at the 95% confidence level. All reported margins of sampling error include computed design effects for weighting. 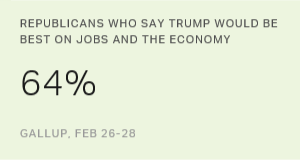 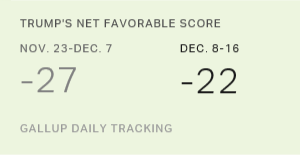