WASHINGTON, D.C. -- Gallup's U.S. Economic Confidence Index averaged -9 for the week ending March 20. This is up slightly from this year's low of -13 in February and up significantly from a weekly reading of -17 in late August 2015. In mid-March 2015, economic confidence was slightly positive, with an index score of +1 -- one of only a few positive weekly averages since Gallup began tracking economic confidence daily in early 2008. The index fell through the summer of 2015, bottoming out at -17 at the end of August. The index rebounded to -12 a few weeks later and has since remained fairly stable. The major exception came in mid-January when the weekly index briefly rose to -7 -- an apparent response to President Barack Obama's final State of the Union address.

For the week ending March 20, the current conditions score of -3 remained consistent with scores in prior weeks. This resulted from 26% of Americans rating the current economy as "excellent" or "good," and 29% rating it as "poor." The economic outlook score was -14, resulting from 41% of U.S. adults saying the economy is "getting better" and 55% saying it is "getting worse." The -14 score represents an improvement from the -21 outlook scores in mid- to late January. Results for this Gallup poll are based on telephone interviews conducted March 14-20, 2016, on the Gallup U.S. Daily survey, with a random sample of 3,537 adults, aged 18 and older, living in all 50 U.S. states and the District of Columbia. For results based on the total sample of national adults, the margin of sampling error is ±2 percentage points at the 95% confidence level. All reported margins of sampling error include computed design effects for weighting.

Americans' views of the U.S. economy held steady for another week, with Gallup's Economic Confidence Index staying within the range generally found since July. The index was -11 for the week ending March 6. 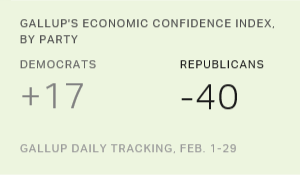