PRINCETON, N.J. -- President Barack Obama averaged 49.5% job approval in Gallup Daily tracking from Jan. 20 through April 19, his 29th quarter in office. That is nearly three percentage points higher than his 28th quarter average of 46.6%, and one of the higher quarterly averages in his presidency to date. The nearly three-point increase from the previous quarter is one of the larger quarter-to-quarter gains for Obama during his presidency; the best to date was a four-point improvement between his 15th and 16th quarters, the period surrounding his re-election as president in the fall of 2012.

Obama's 29th quarter approval average ranks as the second-best quarter in his second term as president, behind a 49.7% average from Jan. 20-April 19, 2013, after Obama's second inauguration. He has had only six higher quarterly averages in his seven-plus years as president.

Obama's job approval rating averaged 50% or higher for six consecutive weeks from Feb. 29 through April 10, including an average 53% approval rating the week of March 21-27, his best since Jan. 28-Feb. 3, 2013. Most of the president's more recent three-day approval ratings have been just below 50%, but the latest Gallup Daily tracking estimate, for April 17-19, is 51%.

The increase came as both parties are in the process of choosing their party's nominee to be Obama's successor. In this time of heightened political attention, there is more focus on the state of the nation and Obama's record as president, which some Democrats and independents may now be viewing more positively.

Obama is the sixth president since World War II to serve 29 quarters in office, joining Harry Truman, Dwight Eisenhower, Ronald Reagan, Bill Clinton and George W. Bush. Clinton and Eisenhower were the two most popular at this stage of their presidencies, as both had job approval ratings above 60%. Reagan, like Obama, was right around the 50% mark. Truman and Bush were highly unpopular, with approval ratings near 30%, as the nation dealt with economic problems and prolonged and increasingly unpopular U.S. wars in Korea and Iraq.

Obama's job approval ratings have been some of the most politically polarized of any post-World War II president, and that polarization has held his ratings down. He has averaged 47% job approval to date over his seven-plus years in office. Aside from higher approval during his "honeymoon period" in early 2009, Obama's ratings have held above the 50% level for only brief periods, including the time just before and after his re-election and the recent stretch in March and early April.

As Americans look to choose Obama's successor and decide whether they generally want to continue with the policy course he has set or change the nation's direction, the public will naturally reflect on how he has done as president. Obama and the Democrats hope his approval ratings will increase between now and the election, to help the Democratic Party's efforts to accomplish the rare modern feat of winning three consecutive presidential elections.

Results for this Gallup poll are based on telephone interviews conducted Jan. 20-April 19, 2016, on the Gallup U.S. Daily survey, with a random sample of 45,221 adults, aged 18 and older, living in all 50 U.S. states and the District of Columbia. For results based on the total sample of national adults, the margin of sampling error is ±1 percentage point at the 95% confidence level. All reported margins of sampling error include computed design effects for weighting. 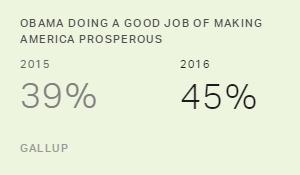 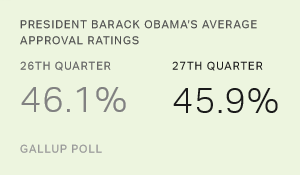