PRINCETON, N.J. -- As Americans observe Earth Day, Gallup finds 42% of Americans identifying themselves as environmentalists, down from an average of 76% in the late 1980s and early 1990s. The results are based on Gallup's annual Environment poll, conducted March 2-6. When last asked, in 2000, 47% of Americans identified as environmentalists, which in turn was down from 63% in 1995. In 1991 -- one year after Earth Day became a global event celebrated each April 22 -- a high of 78% of Americans described themselves that way.

One reason for the decline is that the environment has become politicized as an issue, especially in terms of the debate over climate change and how to address it. In 1991, the same high percentage of Republicans and Democrats -- 78% -- considered themselves environmentalists. Today, 27% of Republicans think of themselves that way, compared with 56% of Democrats, a partisan gap of 29 percentage points. Additionally, many fewer Democrats consider themselves environmentalists today (56%) than did so 25 years ago (78%). So there has been a broader decline in personal environmentalism at the same time that the environment has turned into more of a Democratic than Republican issue.

There does not appear to be a strong generational element to identifying as an environmentalist -- 46% of 18- to 29-year-olds describe themselves that way, compared with between 39% and 43% of older age groups. There were only modest age differences in 1991 as well.

Another possibility for the decline is that the "environmentalist" term may just be less commonly used than it was 25 years ago and may not resonate with Americans as much as it did in the past.

To some degree, too, the term "environmentalism" may be associated with protestors who have taken more radical actions to protect the environment against perceived threats. The Gallup survey does not attempt to define the word "environmentalist" for respondents, so their likelihood of identifying themselves that way, now or in the past, depends on their own understanding of the label.

Also, many environmentally sensitive actions are now commonplace. As a result, it may take more significant action than recycling or conserving energy for one to consider oneself an environmentalist today, but that may not have been the case in the past.

Consistent with their drop in identification as environmentalists, Americans express less concern about certain environmental problems now than in the late 1980s and early 1990s, but that varies by the problem. Americans are much less concerned now than they were a generation ago about air pollution and pollution of rivers, lakes and reservoirs. Their concern about polluted drinking water is down slightly, while they are slightly more concerned about global warming or climate change than in the late 1980s and early 1990s. However, on a relative basis, global warming is still of less concern than most of the other problems.

Also, when considering trade-offs between protecting the environment and promoting economic growth, Americans are less inclined to prioritize the environment today (56% to 37%) than they were in 1991 (71% to 20%).

The decline in Americans' willingness to identify themselves as environmentalists is likely a result of many factors, including the politicization of environmental issues and the routine nature of recycling and other simple, environmentally friendly actions people might have once associated with environmentalism. Also, it is possibly because the term is less commonly used or may have taken on a different meaning than in the past.

Gallup's data indicate that much of the drop in identification as an environmentalist occurred from the mid-1990s through 2000, with smaller declines since then. The Democratic-Republican gap in identification as an environmentalist did not become large until the late 1990s, suggesting politicization may account for more of the recent change but other factors drove the initial declines in the mid-1990s.

The key trend, however, is whether Americans' concern for and commitment to the environment has declined compared with a generation ago, when three-quarters of Americans described themselves as environmentalists. There is some evidence to suggest that it has, with fewer Americans today than in the late 1980s and early 1990s giving "pro-environment" responses to a variety of Gallup questions. But the declines are not evident on all items asked in the two time periods, and on those for which concern has declined, the changes are much less dramatic than for the drop in identification as environmentalists.

Thus, while dwindling identification of the public as environmentalists may not be a welcome development for supporters of the environmental movement, it may not reflect a substantial weakening of the movement and its ability to achieve its objectives. 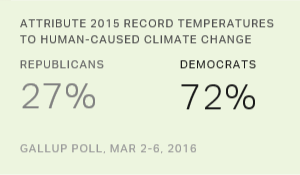 Americans Believe 2015 Was Record-Warm, but Split on Why

Scientists report 2015 as the Earth's warmest year on record; majorities of Americans have heard about these reports and believe them to be true. There is a sharp political divide on whether the record warmth was human-caused or natural.