WASHINGTON, D.C. -- Eighteen percent of U.S. adults in May name the economy in general as the most important problem facing the U.S. This figure is similar to the 17% who mentioned the economy as the chief problem the prior three months. Mentions of the economy have increased slightly this year compared with last year.

Americans in May continue to cite a wide variety of issues when asked to name the most important problem facing the U.S., including dissatisfaction with government (13%) and unemployment (9%). Americans also list immigration (7%), race relations (5%), the federal budget deficit (5%), and elections and election reform (5%).

Although the percentage of Americans mentioning each of these problems has varied slightly from month to month, the basic pattern of concerns has remained similar since February.

Many issues atop the list have ebbed slightly in prominence by one or two percentage points over the past month or so, and mentions of healthcare (4%) have fallen four points since March. But the economy in general has remained the problem mentioned most often for four consecutive months.

The percentages of independents (16%) and Democrats (11%) naming the economy in general as the country's top problem have not changed much in recent months, while the percentage of Republicans mentioning the issue has increased sharply.

Since March, an average of 27% of Republicans have said the economy is the top problem facing the country, up from an average of 13% from December to February. Republicans' greater concern about this issue could reflect GOP presidential candidates' views on economic problems in the current presidential election. With the presidential election campaign roaring on, the economy remains the single leading issue in Americans' minds as the biggest problem facing the country. Economic concerns more generally make up about 40% of all "most important problem" mentions. This comes as Americans' confidence in the economy has recently sagged a bit and as Americans prepare to elect their next leader to steer the country.

Gallup has found that the economy is one of the top campaign issues for both Democrats and Republicans. But while members of both parties agree the issue is a pressing one, Republicans are nearly three times as likely as Democrats to say the issue is the top problem facing the U.S. This is consistent with their confidence in the national economy -- Democrats have much more positive views -- and reflects the nature of how Americans view the economy through their party's lens.

Results for this Gallup poll are based on telephone interviews conducted May 4-8, 2016, on the Gallup Daily tracking survey, with a random sample of 1,025 adults, aged 18 and older, living in all 50 U.S. states and the District of Columbia. For results based on the total sample of national adults, the margin of sampling error is ±4 percentage points at the 95% confidence level. All reported margins of sampling error include computed design effects for weighting.

The economy tops Americans' concerns, as it has for several months. Republicans continue to be more likely than Democrats to mention the economy. GOP dissatisfaction outpaces that of Democrats. 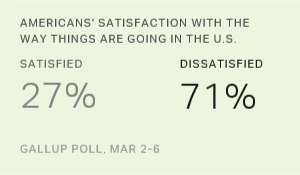 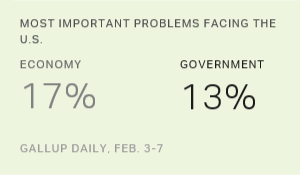 Americans in February are most likely to mention the economy in general as the most important problem facing the U.S. This is a change from January and December, when more U.S. adults were concerned about the government and terrorism.