PRINCETON, N.J. -- A majority of Democrats, 57%, describe their views on social issues as liberal. At the same time, Democrats are about as likely to say they are moderate (37%) as liberal (41%) on economic issues. Most Republicans say they are conservative in both areas, but more say this about economic matters (73%) than social ones (62%).

These results are based on Gallup's May 4-8 Values and Beliefs poll. Each year, Gallup asks Americans to describe their views on social issues and, separately, economic issues using a five-point "very liberal" to "very conservative" scale.

Overall, Americans are evenly divided in their self-described ideology on social issues -- 34% identify as conservative, 31% as moderate and 32% as liberal. On economic issues, Americans are more likely to say they are conservative (41%) than moderate (35%) or liberal (20%).

Americans' general tendency to be more conservative/less liberal on economic matters results from Republicans being much more likely to identify as conservative on those issues than Democrats are to identify as liberal, as well as independents' greater tilt toward economic conservatism. The roughly equal division in Americans' social ideology is because of Republicans' and Democrats' roughly equal likelihood of identifying as conservative and liberal, respectively, as well as independents' even split between social conservatism and social liberalism.

Americans have in recent years been more likely to identify as socially liberal, reducing what had been a consistent double-digit conservative advantage to a virtual tie. Those trends in self-identification are consistent with trends toward Americans' holding increasingly left-leaning positions on same-sex marriage, marijuana and a variety of moral issues.

The movement toward greater liberalism on social issues is Democrat-driven. The 57% of Democrats who currently say they are socially liberal is up from 35% in 2001. The trends in liberal social identification are mostly flat among independents and Republicans. Since 2001, the conservative-liberal gap on economic self-identification has been no less than 20 percentage points. Democrats have become much more likely to identify as liberal on this dimension since 2001 (from 22% then to 41% today). Republicans have become more conservative (from 64% to 73%), with little change among independents. This has resulted in a slight narrowing of the conservative-liberal gap among all Americans over time.

Over the past decade, Americans have become more likely to identify as liberal on social issues, to the point at which there are roughly as many social liberals as social conservatives in the U.S. That makes likely Democratic presidential nominee Hillary Clinton's more socially liberal issue positions, including her shift toward favoring same-sex marriage over the past decade, less of a liability today than they might have been for prior Democratic candidates.

Americans' tendency to identify as conservative on economic issues may be an advantage for likely Republican nominee Donald Trump, although his positions on free trade and other economic issues have caused many to view him as more of a populist.

An analysis of the poll data by Americans' expressed likelihood of voting for Clinton and Trump reveals that the ideological makeup of probable supporters of the two presumptive nominees largely reflects the views of the party bases they will represent in the November election. Americans who do not exhibit a clear preference for either candidate at this point are similar in their views to the broader U.S. adult population, so their ideological preferences do not clearly indicate how they might vote in November.

Ideological fit between voters and the presidential candidates is just one of many factors that will help determine the outcome of the fall election, along with Americans' assessments of the state of the nation, their evaluations of the two major-party candidates, and voter turnout among supporters of each party and presidential candidate.

Results for this Gallup poll are based on telephone interviews conducted May 4-8, 2016, with a random sample of 1,025 adults, aged 18 and older, living in all 50 U.S. states and the District of Columbia. For results based on the total sample of national adults, the margin of sampling error is ±4 percentage points at the 95% confidence level.

For results based on the samples of 342 Republicans, 304 Democrats and 361 independents, the margin of sampling error is ±7 percentage points at the 95% confidence level. 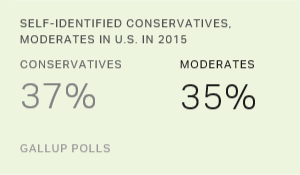