WASHINGTON, D.C. -- Americans' confidence in the U.S. economy improved slightly last week. Gallup's U.S. Economic Confidence Index averaged -12 for the week ending May 29, up three points from the prior week. Americans' views of the national economy have skewed consistently negative for over a year -- Gallup's Economic Confidence Index registered positive in several weekly readings between late December 2014 and mid-March 2015, but has been negative ever since. From a broader perspective, index scores this year, as they were last year, have been well above most of the readings in Gallup's eight-year trend, particularly the deeply negative sentiments found in the years after the 2008 financial crisis.

For the week ending May 29, the current conditions score registered -4. This is the result of 26% of U.S. adults rating the current economy as "excellent" or "good," and 30% rating it as "poor." This component has not varied much over the past year, with scores ranging from -9 to -1. The slight boost in economic confidence comes during a great week for the Dow, which made significant gains early in the week and maintained them through Sunday. Certain areas of the U.S. economy, such as the housing market, have also shown signs of improvement. But from a broader perspective, Americans' confidence in the economy over the last year generally has been consistent and more negative than positive, with only minor week-to-week fluctuations.

Results for this Gallup poll are based on telephone interviews conducted May 23-29, 2016, on the Gallup U.S. Daily survey, with a random sample of 3,544 adults, aged 18 and older, living in all 50 U.S. states and the District of Columbia. For results based on the total sample of national adults, the margin of sampling error is ±2 percentage points at the 95% confidence level. All reported margins of sampling error include computed design effects for weighting. 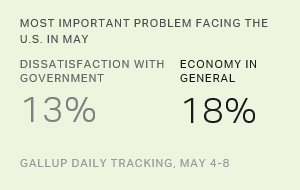 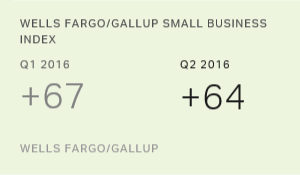 U.S. small-business owners' optimism about their business situation is mostly unchanged from earlier this year and matches the level of optimism found one year ago.