PRINCETON, N.J. -- While Americans' faith in many U.S. institutions has fallen from the levels of previous decades, the public's confidence in the military has remained consistently high. The average confidence level across all 14 institutions tested in 2004 was 43%, compared with 32% this year. In contrast, the 73% confidence rating that Americans give the military today is essentially unchanged from the 75% rating they gave it 12 years ago. The military reached its highest level of confidence -- 85% -- in March 1991, just after the first Persian Gulf War. This rating remains the highest Gallup has yet recorded for any institution. There was another sharp uptick in Americans' confidence in the military after the 9/11 attacks. Confidence has fluctuated some in the years since 2001, but has generally remained high, dropping below 70% only once. From 1975 through early 2001, confidence in the military averaged 63%. Since 9/11, it has averaged 75%. The high confidence ratings in the military reflect generally strong ratings across all segments of the population, although Republicans' 82% confidence level is significantly higher than Democrats' 65%. Seventy-eight percent of conservatives and moderates have confidence in the military, contrasted with 59% among liberals. The 60% confidence rating among young Americans (aged 18 to 29) is lower than that of those aged 50 to 64 (82%) and those 65 and older (79%).

Americans continue to place more faith in their military than in any other societal institution, and despite some fluctuations over time, this high level of confidence has not abated. The military maintains this high level of respect even as the public's confidence in many other of society's institutions has declined compared with levels measured a decade ago and further back.

Americans' robust confidence in the military, which clearly rose after 9/11, has stayed high even as a majority of Americans came to believe that the most significant U.S. military action of the past two decades -- the invasion of Iraq -- was a mistake. Although Gallup did not ask about confidence in the military at the time of the Vietnam War, which likewise a majority of the public came to see as a mistake, a reading in 1981 showed confidence in the military had dropped to 50%. This was a time when Vietnam and its associated controversies were perhaps still relatively fresh on Americans' minds, and also a year after the aborted attempt to use the military to rescue American hostages in Iran. The 1980 presidential campaign in which Ronald Reagan consistently called for an increase in military spending would also have been fresh on Americans' minds in 1981.

Today is clearly a different era, and unlike the Vietnam era, members of the military are often applauded, given privileges and perks, and commonly greeted by the encomium, "Thank you for your service." It may be in particular that 9/11 and the specter of terrorism have been major factors in sustaining Americans' continuing high levels of faith in the men and women who don uniforms to protect and defend their country. 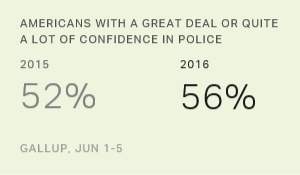