PRINCETON, N.J. -- Congress' harshest critics -- the 53% of Americans who rate the job Congress is doing as poor or bad -- feel more strongly about the undue influence that donors and lobbyists have on Congress than they do about any other major criticism of the institution. More than half of this group strongly agrees that members of Congress pay too much attention to what their contributors want them to do (56%) and what special interests and lobbyists want them to do (55%). Nearly half (46%) strongly agree that members of Congress should be willing to compromise more.

By contrast, 4% of those most critical of Congress say its members care a lot about what their own constituents want them to do; 21% strongly disagree with this statement.

These results are part of a special Gallup analysis of the reasons behind Americans' extraordinarily low regard for Congress. Just 13% of Americans rate the job Congress is doing as excellent or good, and Congress' job approval is at 16%.

In a June 1-5 survey, Gallup asked Americans to react to a series of 14 positive and negative statements about Congress that encompass the major concerns that previous Gallup research shows most bothers Americans about the institution. The responses among Americans who are most critical of Congress, as well as those whose views of Congress are either positive or neutral, are shown in the accompanying table. As would be expected, those who rate the job Congress is doing as poor or bad are much more likely than others to judge Congress negatively across the 14 dimensions.

The views of the majority of Americans who say Congress is doing a poor or bad job may be particularly helpful in revealing the institution's core image problem. Additionally, those who are most critical of Congress are also the most knowledgeable about Congress, according to their answers to several factual questions about how Congress operates, underscoring the value of understanding what this group thinks.

Notably, despite the 46% strongly agreeing that Congress should be willing to compromise more, only 32% of those most critical of Congress strongly agree that members pay too much attention to what their party leaders want them to do. Americans most critical of Congress thus apparently see partisanship, at least as it plays out in party leaders telling members what to do, taking a backseat to the influence of special interests in creating gridlock in Washington.

Americans who view Congress as doing an excellent, good or fair job are not nearly as likely to strongly agree with critical statements about Congress, but a substantial percentage still agree, even if not strongly. Among this group, lack of congressional compromise ranks first on the "strongly agree" list, with others falling behind. The complete results for this and other groups are reported at the end of this article.

A somewhat different perspective on Congress' image problem emerges from Americans' answers to an open-ended question about why they rate Congress the way they do. Almost half of Americans who say Congress is doing a poor or bad job cite congressional inaction or gridlock as the top reason for their view. This is consistent with the reasons Americans have traditionally given when asked open-ended questions about their views of Congress.

Relatively few in this group of critics spontaneously think of outside influences on Congress, such as lobbyists or financial contributors, even though these concerns spark relatively high levels of agreement when they are asked about specifically.

Thus, lack of compromise emerges as a leading concern about Congress in both the agree/disagree measure of what's wrong with Congress and the open-ended format. What is different about the results of the two approaches is that few Americans who are critical of Congress mention special interests or lobbyists in response to the open-ended question. This seeming disparity may indicate that Americans distinguish between what they believe Congress is doing wrong and the factors behind that failure. The open-ended questions reveal that Congress' lack of action on the nation's problems is the ultimate problem. At the same time, Americans' responses to the agree/disagree statements apparently tap into an underlying belief that special interests and big donors are thwarting the nation's business more generally.

The explanations for Americans' low ratings of Congress as a whole appear to coalesce into two broad categories. First is Americans' belief that Congress is not accomplishing enough and suffers from gridlock. Second, and related to the first, is their belief that Congress is under the control of outside influences, including those with money and lobbyists, and is less interested in the interests of their constituents. These are also the primary factors explaining the particularly negative view of Congress' harshest critics.

Congress' failure to act on immigration reform in 2007 or pass a federal budget within the required time frame in 2013 are two of the more spectacular historical examples of legislative intransigence undermining public confidence in the institution. The inability of Congress to take action on gun control this week, despite much evidence that the public supports increases in background checks and restrictions on the sale of assault weapons, is a recent illustration of the public's chief complaints. 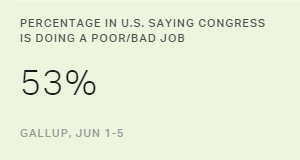 A majority of Americans rate Congress' job performance at the low end of a five-point scale, calling it "poor" or "bad." The Republicans in Congress fare worse than the Democrats.